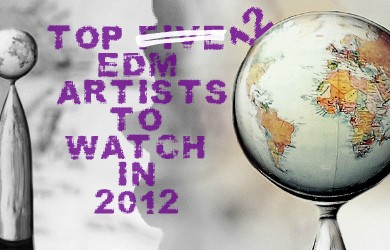 3 Biases
(borrowed – and edited – from our friends at Dancing Astronaut)

1. Salacious Sound Bias – If the artist has been featured on Salacious Sound a ton it probably means we like him/her a lot or they’ve made a big splash in the world of EDM to warrant a post. The mere fact that we have developed a connection with them will obviously aid in their ranking. If you don’t like it – tough luck.

2. Geographical Bias – We are a North American (Toronto, Canada) based media outlet. Artists that were big here may not have necessarily been as big in Europe, Asia, or Antarctica.

3. Relevancy Bias – This overlaps with the ‘Salacious Sound Bias’. Let’s be clear here, we post a certain type of music more than others (think: electro/house, dubstep/dnb music). We love all forms of EDM, but we try and feature artists and tracks that are relevant now and will be in the future. Those of you that have followed us for a while will get exactly what we mean, however, if you just started following there are certain tracks you can expect to be posted on our website and certain tracks you can expect to be left off. One day we will cover the entire spectrum of EDM, and year by year we aim to get better at doing this.

Nothing but love,
Corey (aka ReySon)

Cazzette needs no introduction. I believe without a doubt that Seb & Alex have made their mark on the scene in 2011 with countless HypeM chart toppers and a handful of Beatport toppers. In addition, the management team behind the veils do have their heart in the right place which makes for a solid unequivocal decision. Best of luck in 2012 guys! If the world doesn’t see you now, they will open their eyes soon enough…

Figure, my friend! I praise you for offering so much of your work for free download. I truly believe the world is headed towards a musical-freedom zone, so thank you for bearing so many gifts over the year. You somehow slipped under my radar when you made your pass over Toronto, but you have my word that i will witness and experience you live the second time around. Folks, everytime a Figure tune is unleashed it automatically makes the Top 50 chart on HypeM, should i continue?…

Garnering millions of SoundCloud plays, millions of YouTube plays (including a UKF posting) and tipping the charts in their favor in every direction every single time a track is given (for free), Adventure Club never ceases to amaze me. I remember the days as a naive toddler (well not really) when my ears were first laid on their godly noise. Leight & Chris, i know 2012 will be mega-mental for you boys, i am glad to be here to witness it all. Rock the casbah!

With only a couple of official releases under his belt Varien has managed to team up with Skrillex right out of the gate! His orchestral rendition below was added last minute as a bonus track on Skrillex’s Bangarang EP. The kid has mad potential, obviously if Sonny himself notices him. Im sensing a future relationship with Sonny, so that spells everything good for Varien. This one is a definite magnet this year, let your ears gravitate to his sound! In addition, as part of the Monstercat Media family i know 333% without a doubt that this kid will make it to the top. Their heart is in the good spot too ;D

Merely infants in the musical path they have chosen to lead this year Project 46 owned the Beatport charts with their debut EP and conquered the Hype Machine realm. There seems to be no stopping these warm-hearted lads in their quest for global musical dominance. Take a leap now and friend them on their Facebook page, you won’t regret it. This duo also happens to be from Monstercat Media, so jot these fellows down in your musical diary. If your curious to see what Monstercat Media has been up to this past year be sure to check out their Best of 2011 Album Mix (for a free download of this album mix visit my facebook page).

Ford Mustang, i mean…MORD FUSTANG! Taking probably one of the most annoying trends this year and seemingly making it all worth while Mord Fustang crashed onto the scene with the ultimate energy in the electro field. Every release has overtaken the charts in every sense. You can definitely expect more from this wonder kid, i can feel it! Side note, his label plasmapool records has a lethal roaster for 2012, be on the lookout for them specifically this year! Yowzers, all so hawt hawt hawt 🙂

The bloggosphere was rocked this year! Why? Let’s just say The Hype Machine needed a mechanic after Overwerk had their way with it! Dominating the scene with his debut EP, The Nth, Edmond couldn’t have done it any other way this year. Cheers to a wonderful beginning and prepare the bubbly for popping, because this upcoming year will be one for the records my friend.

Here we have ourselves another Plasmapool rookie, but don’t let this freshman fool you! He has shown the world a glimpse of what he can do by putting in his pocket a handful of chart toppings. Do not take this one lightly as well, go buy his records now and wait patiently for more to come. I feel a beautiful energy storm ah brewing. Tick tock…

Knife Party! In french, ‘Un parti avec des couteaux’! Haha, doesn’t have the same ring, so Knife Party it is! Fuck folks, need i really drill you all with facts on this one? You do know Rob Swire & Gareth McGrillen from Pendulum are behind the helm of this musical spaceship right? Oh man oh man would i kill for an interview! Perhaps i should start working on that…

Blasting some of the best feel-good energy for the past year now, Alesso has vibrated millions of ears thus far! The youngster completed his first official tour this year, was billed for mega festivals such as Electric Daisy Carnival, and reigned supreme on all charts. Take the latter as a testament to something monumental that is yet to come. Alesso my friend, thank you for last year, i am excited for this one…

Remember, until Jan 31 every “Like” on my Fb page results in a .50cent donation divided between Oxfam, Save The Children & The Salvation Army. Change the world!
Cheers,
Corey