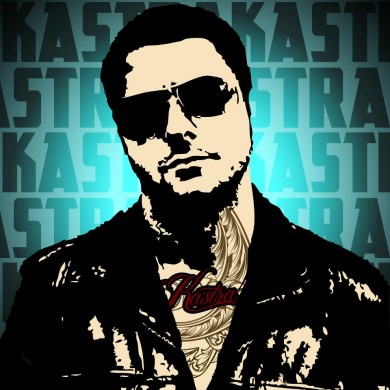 Kastra has been turning out great remixes and original tunes for the past year. 2012 was a huge year for him and the future looks even brighter!

Your music has a great sound to it, what’s your musical background and how does that affect your music?

I’ve played guitar for years. I have a real rock influence in my music. My songs typically range from four to five minuets. I try to break away from the typical thirty second intro and outro a lot of house music has. I try to make my music more listener friendly and that comes from my rock roots. knowing how to play guitar, drums and bass has really helped me. I have a grasp on music theory which I think not a lot of young producers have. For a young producer music theory is a big hurdle to jump over. I couldn’t imagine trying to learn music theory and music production at the same time.


When was the first time you heard dance music?

I was gradually introduced to it but the first big impact I had with it was at Bonaroo my freshman year. We were on our way to see Phil Lesh perform and on our way we passed by Ghostland Observatory. I remember seeing all these lights and all these kids going crazy to this music my friends and I never really heard before. When we got to Phil Lesh we ended up leaving to back and see Ghostland. After that I started making industrial type music reminiscent of Nine Inch Nails. My junior year of college I went to Australia and ended up getting a copy of Deadmau5’s Random Album Title. That album was really accessible to me, it was very ambient and progressive. When I went to clubs in Australia they would play stuff similar to Deadmau5. I loved that, back in the states I hated going to clubs because all they played in the states was top forty.

What’s your favorite part of the production process?

I like the creative writing part. It takes a decent amount of time to make a song that’s intricate and interesting. The writing part takes about five to ten hours and the remaining time is all the mix down. I hate the mix down process, it’s so tedious and time consuming. I play my songs back to back with the biggest records I know. So if my song doesn’t sound great next to a Knife Party song then I know I have work to do.

What DAW and VSTs do you use?

I use a Mac Book Pro for my production. KRK Rocket 6’s for my speakers. For software I use Ableton Live 8. For sound design I use Sylenth and Massive a lot. But if I’m making progressive music I use Nexus. For processing I use Ozone and the Waves plug-ins.

Your biggest track is your remix of Madeon’s Finale, why do you think people took to that remix the most?

That song is so much different from what I’ve heard from Madeon in the past. I loved the song but it’s so slow and I had trouble mixing it in my DJ set. I wanted to speed it up and give it a Nu School disco glitchy feel. Normally speeding up a track ends up making it feel rushed. But I was really surprised how great it sounded. I added so many glitchy sounds and even took a que from my rocky roots and added some guitar in there too. People must have been wanting to hear what I wanted to as well, the track took off. Looking back there are somethings I could have done better but I’m happy with it.

It’s cool to be a part of this musical revolution. Growing up I always thought I would be stuck in musical movements of the past. It’s so amazing to see so many people excited about music. Personally for me the first twenty years of my life there was only a small group of people I could discuss music with. But now I feel like I can discuss music with almost anyone. There are still people going to shows that don’t really know why they’re there. When I see people at shows that are there for the drugs I see it as a challenge to turn them on to the music itself.

Being a musician yourself, what do you say when people comment on EDM not being “Real music”?

It bugs me a lot. I played in bands and I have never experienced something that is as musically difficult as what I’m doing now. If you’re a guitar player for a band, you’re job is to write the guitar part, as a producer you’re job is do write everything. People have this horrible misconception of what it takes to produced electronic music. People think the computer does it and that’s not the case at all. Listen to Trance, its similar to classical music. The melodies and chord progression are beautiful. If you were to show people trance they might get it. People think I just make beats, I make songs. That drives me crazy.

I’ve got a lot of music I’m going to put out.  A ton of remixes, some mashups, and a lot of originals! Hopefully I can get in touch with a label and have some official releases. I might be playing my first festival in Kansas City. Last year was great and I got a lot ahead in 2013.