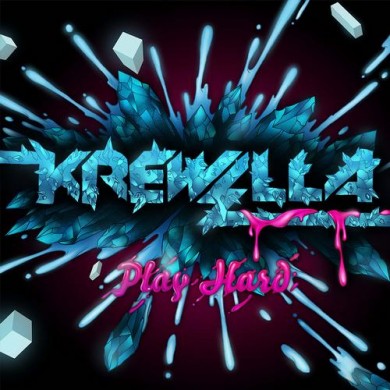 If interested you can buy this album from Beatport!

Hailing from Chicago, Krewella have been blowing up all over the states. They have a unique style that combines pop vocals with some of the best produced Dubstep around. When they released their hit single “Killin’ It” a little over four months ago, I quickly took notice. I was drawn to their style and found myself waiting for what they had next. What they delivered was a six track EP that builds upon the sound they started earlier this year.

‘Play Hard’ opens up with an overload of sounds. Synths and wobbles are everywhere for the first few seconds. The vocals sound great here but I have one complaint: they are a little cheesy. The first words you hear are “I can play hard, meet me at the bar, you’re fucking with a star.” Although they are almost laughable they still sound great. The production on this track and the whole album is incredible. The drop on this song is on the more melodic side. Vocals are chopped and thrown around while the synths are blaring. The song construction on this is another strong point. Kris Trindl, the man behind the production, has a real talent for crafting music. In spite of the corny lyrics this song is an instant hit.

This is the song that made people heads turn. The lyrics on this are a lot better than the previous track. The stand out part of the song is the drop. While most songs save the intensity for that one part, Krewella keeps the intensity throughout the entire track. Once the drop is over, it’s still felt through the remaining verses. The whole song has a colourful aesthetic to it. The bass isn’t overkill and the melodies are simple and catchy. This is a song that will be played for a long time at clubs. The next song, ‘Can’t Control Myself’, reminds me of 90s dance music. It has a nostalgic feel to it while keeping Krewella’s signature sound intact. Even though it reminds me of older music, it’s still the heaviest song on the EP. Following it is one of my favorite songs on the EP, ‘Alive.’ This is the lightest song on the album. A beautiful melody is played while the vocals resemble something you could find from the top forty. It is extremely poppy and the melody resembles somthing Avicii  could have produced. This song flows perfectly with the EP, breaking up the craziness with something that is lighthearted.

Although ‘One Minute’ was released before ‘Killin It’, it didnt garner the group as much attention. You can tell that they were still trying to find their style. It’s a good song but the whole thing is sensory overload. The track combines Dubstep, Rap, and Electro House. It works but I feel for some this song will be too much. This was one of my most anticipated releases this year, and it delivered on everything I wanted. Krewella have really made a sound you can easily recognize. The production on this is remarkable. For such a young group, they already have a branded style which will instantly have you hooked. You will love this EP just like I did. They have a bright future ahead of them. Check them out on these upcoming tour dates!