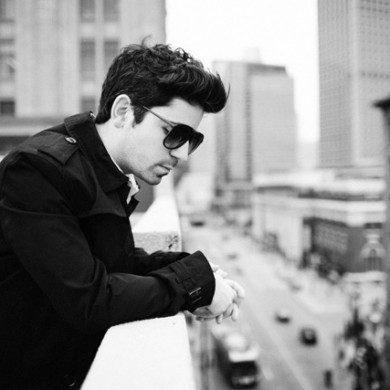 Felix Cartal is a Vancouver Producer / DJ and long time SalaciousSound favourite, with a penchant for vocal electro house, and a talent for making popular tracks out of the unexpected. He just released a fantastic full-length effort in March titled ‘Different Faces’ – you can pick that up on iTunes here.

He’s been touring on a hectic 2-4 date per week schedule with another Salacious favourite, Clockwork. It’s my great pleasure to present to you today an exciting new collaboration between the two which features the lovely vocals of Miss Palmer. The track is called Black to White, and is an absolute banger, as you will shortly hear. It will be released as part of the Black To White remixes release coming out May 29th on Dim Mak Records.

Finally, as the title suggests, I was able to sit down with Felix for a half hour to shoot the shit about his tour, the album, and what he’s got to look forward to this summer.

I’m grateful for the opportunity, and can’t wait to catch him at the festivals – look for him at Sasquatch, EDC Vegas, WEMF, and lots more. Full dates and more are available at his official site.

Cal: Hey Felix, thanks for the chat. Where are you right now?

Cal: Do you have a break in the tour?

Cal: What are you up to in Van between tour dates?

Felix: Well I’m working with a rapper who just got signed to RCA. She’s really talented. I just got introduced to her, and I think we both come from totally different places, and that’s sortof why what we have come up with works. I’ve been doing beats for her. It has been cool to get away from the usual.

Cal: Freshening up the ears huh?

Felix: You know it. It’s nothing that’ll ever come out as Felix Cartal tracks though.

Cal: You have some Canada dates coming up?

Cal: Have you played in Vegas before? Your performance at EDC last year was great, by the way!

Cal: Looking forward to seeing you at EDC and WEMF this year!

Felix: Should be fun!

Cal: So for the Different Faces tour, it sounds like there have been a lot of different production arrangements. What has been the most interesting so far?

Felix: The Avalon show in Los Angeles was really cool – they brought in some additional production, these giant triangles that have a bit of a Daft Punk pyramid vibe, and the stage was really commanding. I have this video loop that I use at the shows, and it looked great.

Cal: So you’ve had Clockwork supporting. How has the vibe been?

Felix: Yeah he’s great. Super chill, and he likes to party, and he’s an awesome DJ. Very flexible, and always plays different every night. It’s great to have someone on tour who pushes things forward. All his productions are on point too. I see big things in his future.

Cal: Any chances to collaborate while on the road?

Felix: Yep, we actually started something before we went on the road, and we just had the chance to finish it. It has a big vocal on it. It’s pretty different, and I’m excited for it!

Cal: On that note, there’s a perception maybe that you just make bangers – how do you think that was addressed by your album?

Felix: For me, records are a good chance to spread your wings in a way that you wouldn’t normally get to do if you did a group of singles. I think the biggest thing is that I had the ability to collaborate with a bunch of different vocalists at one time. That sort of, in one statement, can lay it down, in the fact that ‘Ok I’m not just gonna make thirteen versions of The Joker’ and make that a record because I don’t think that would make any sense.

Cal: So my roommate has really been in to the album, playing it on repeat most nights. He loves Don’t Turn on the Lights.

Felix: I’m glad somebody likes it. That one person out there likes it. I’m happy.. haha

Cal: Yeah it’s been really well received – we ran several pieces on Salacious, and the album review killed it.

Felix: Little songs have surprised me more than other ones which I thought would do well. It’s always like that with a record though. It’s hard to predict which ones will go off the most. It’s made me happy to see that people are willing to try something else.

Cal: I expected the Sebastien Grainger track would do the best, but there was a track last week..

Cal: Yeah, that had a huge response! I guess that speaks to the flexibility of the album, and like you say, different vocalists will have different effects.

Cal: Back to the tour for a second, you have a date in Vancouver on May 20th. Is that something of a homecoming?

Felix: Well.. it’s the official date for the tour, and I haven’t done one. It’s the long weekend, it’s the Sunday. It’s going to be a great vibe, and it’s a great party weekend for Vancouver. Homecoming? Not particularly, but every time I play in Vancouver it’s absolutely awesome.

Cal: I try to touch on Vancouver as much as I can with artists.. I was talking to, we’ll say a “well-known” producer, and he had nothing to say of the scene. Didn’t feel like he had access, didn’t know anyone, didn’t want to talk about it at all.

Felix: So there’s a promotional company out of here called Blueprint. They’re one of the best that I work with, and I don’t mean that in a biased way. They grow artists. They bring them in when they’re young, and are willing to take gambles, bring them up through the ranks, and I think that’s really important in a promotional company. A lot of promoters just book you, the show happens, and that’s the interaction you get. I think the fact that Blueprint is like that is really positive towards our scene, because most of the DJs I’ve heard who play for them have nothing but positive reviews because of that.

Cal: To what extent is that because of their following, or the fans that they attract?

Felix: The best place to be is where your fans respect the company and know the events they throw is quality, so even if they don’t know a particular artist on a week, if they respect the curation they’ll be willing to take a chance because there’s trust there.

Cal: So on that note, with respect to how artists are earning a living these days, I mean musicians have this sort of relationship with their fans that’s much more personal than it is like they’re a product which is marketed. So if their favourite artist has a show coming up or news they’re excited about, they’ll share it with their friends.

Felix: For sure. Twitter has the ability to humanize people you wouldn’t see in that light. Even the way Deadmau5 wrote his latest song on ustream with people watching, that totally flips everything around. Back in the day, Metallica was in the studio for five weeks at a top-secret location, no connection to the outside world, no reporters. To flip that on its head and do it the opposite way is so cool.

The artist model now, even news, everyone gets it from their peers rather than the ‘official’ news sources. And you can apply that model to the music industry too. The effect is just that you don’t have more freedom to take different paths.

Cal: What’s the most insane thing you’ve ever had in a rider?

Felix: heh. On my own rider?

Felix: I don’t know.. it’s not that crazy. I have a coke slurpee on my rider. So when I played in Taiwan once, they misread it, probably because of the language barrier, and they just bought me a bunch of coke.. and it was reallllly awkward. It’s really sketchy to get that stuff in Taiwan.

Cal: Ok well thanks again Felix. Can’t wait to see you this summer!

Felix: Cheers! You too Cal.