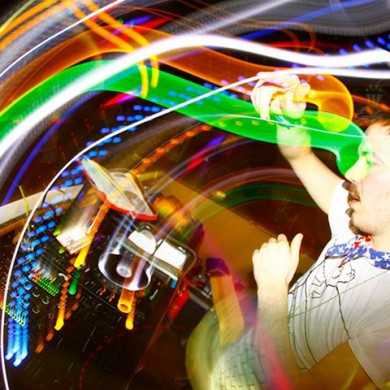 First of all, if you’re not already familiar with Parisian producer Victor Watel (aka. Panteros666) and Club Cheval (his collaboration with Canblaster, MYD, and Sam Tiba), then I’m afraid that The Internet has failed you entirely. After hearing a promo of his mini-LP, Hyper Reality, which dropped today on Bromance Records I just had to get in touch and learn more about him and the inspiration for the release. A few hours later I was sitting in the California sun with a Gatorade in one hand and my phone connecting a Skype video call to his studio in Paris. I’d highly recommend putting on the Hyper Reality mini mix (above) while reading this; it’s incredibly imaginative and in my opinion is a milestone release for the evolution of techno.

So where does the name “Panteros666” come from?

It comes from the same name-brainstorming session as Club Cheval; the project was started at the same time. “Panteros” comes from “Pantera,” the band, because I love their sound’s simplicity and power. I turned it into Panteros became I love finishing words in French with “os.” I just thinks it makes words sound cooler… you know? The 666 came a bit later. Originally, I was just Panteros, but my Twitter handle was Panteros666 and a friend told me I should just go with that. I thought it was a good idea and it stuck, haha.

Now obviously your stuff as Panteros666 is very high-quality so that leads me to ask what you worked on before that? What were your past projects?

Really? That’s amazing, I would have never guessed, haha.

Yeah, well I had lots of years of experience in music drumming and it just seemed natural to switch from drums to grooveboxes and synthesizers – it made things much more interesting to do music again because I was a bit tired of drumming, honestly

How would you define your style to someone who’d never heard your music before?

I’ve been really influenced by 90s Belgian techno because to me the idea of a good techno party is one that’s setup in a big warehouse, something really industrial, and that’s something I try to recreate in my music. At the end of the day it’s my own style of techno.

When you start a new track is there a specific thing that you always start with? like a percussion loop or a certain synth? I’m really curious to know.

I’m happy with a demo when I think that I have a good percussive or melodic combo. I know that some producers always use the same loops or synths and maybe that’s something that I should do, but I kind of start from a blank page each time. I focus on atmosphere first – even if I have a good percussive and melodic combo, if the atmosphere is wrong then I scrap it. I want the focus to be very graphic.

That’s very interesting. So you’re focusing on styles and moods rather than the components.

I don’t like functional techno. It’s something that I can’t stand and I never want to do that. Like okay, yes, it’s music made with electronic instruments, but we’re not robots you know? We’ve got a heart beating and a brain thinking about that and I’m not happy when there are no feelings in a club track

And what’s your production setup?

We all share a studio in Paris – it’s actually the in the same block of studios at Para One and Surkin, and Birdy Nam Nam. We’re all together in the same building in paris. it’s the usual setup with a big Mac computer and lots of synthesizers and analog equipment. We have lots of synths though since we each had two or three synths each, then brought everything together in one place.

What’s it like working in Club Cheval? How is the workflow organized?

I’m the best with rhythms and percussions, then Canblaster is best with melodies, MYD is really good with cutting samples and tuning them, and Sam is the one with the biggest background in hip-hop an urban music. That’s kind of our skillset- I mean we all do everything, but those are our specializations.

Do the other members of Club Cheval influence your music at all?

Really the only people I trust to give feedback on my tracks are the other Club Cheval members. Anyone else might find them too exaggerated or too far out, but they really understand you know? When I made the LP I wanted the other members to say “Wow, Panteros this is cool.” The three of them are next-level producers and I wanted to be able to impress them.

That’s an amazing dynamic that you have.

It’s a good team, it really is. the best team that I’ve ever had.

Are you excited about your LP release?

It’s more of a mini-LP and it came about after a few production sessions for Club Cheval when I had lots and lots of demos sitting around. I thought that I’d like to finish them so I finished 10 and cut it down to seven. I’m really quite excited about it, not to mention my live show. have you seen my Creator’s Project video on it?

I haven’t, but I’d love to. Can you send it to me right now?

Yeah, here I’ll show you right away. I’ve been working on it for a year with video engineers and graphic designers and it’s finally ready for live shows. it lets me integrate videos and images that I  have in mind with my music with some kind of futuristic approach to it.

I love that that ties back into your dedication to creating atmosphere, it’s incredible

Thank you, yeah I’ve watched a lot of electronic live shows where it’s only about geometric forms and things like that. it’s really boring to me, I’m 25 years old and I’m used to being deep in the Internet and seeing all sorts of crazy things. I wanted to bring that to the live show and I even integrate my own movements into it by using Kinect technology. It’s fun and experimental.

Going back to your mini-LP: would you say that it’s very accessible or is it geared towards a specific crowd?

I really think it’s the most accessible music that I’ve made in my life.

And what was your favourite track on the release?

My favourite track…? They’re all my favourite, haha.

Okay, easier question then: What do you think your fans’ favourite will be?

Hyper Reality is the easiest to dance to. Olymp X is another great one, it’s a mix between electro-clash and basslines with a kind of hip-hop rhythm. it’s a good hybrid that’s never been tried before and I’m quite proud of it. my goal was to make something that doesn’t exist today, you know? Then on that Planetary Wifi track I dug some 96 techno and trance and modeled it off of that, but ditched the tacky stuff and did what I want. Man, I sent it off to other DJs recently… the ones that I respect a lot whose opinions really matter to me and it made me so happy that they liked it. Hearing that guys like Tiga like my stuff makes me happy like I can’t explain. I was so worried that nobody would understand the release so now it feels like half the battle is already won.

I hope you all check out his LP, Hyper Reality. I guarantee that you won’t be disappointed.