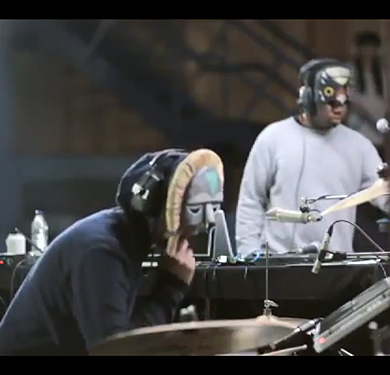 Throughout the month of March, BBC Radio 6 Music are celebrating 10 years of broadcasting, with live performances from a range of artists including De La Soul and Orbital.

Yesterday a live performance starring SBTRKT and Sampha was released online. The two perform their collaboration live, using a range of instruments, samplers, looping, and effects racks for a packed house at the BBC’s Maida Vale studios.

Watching this video is a reminder that, as much as the DJ has become a superstar, that there is always going to be a place for musicians with live performance skills. Sampha’s lovely voice floats above the mix that they craft expertly, and on the fly. It’s the live percussion that really gives the performance its signature feel however. What’s interesting is it doesn’t feel significantly “live-er” than his recordings – a testament to his performance abilities and the swing inherent in the recorded works.