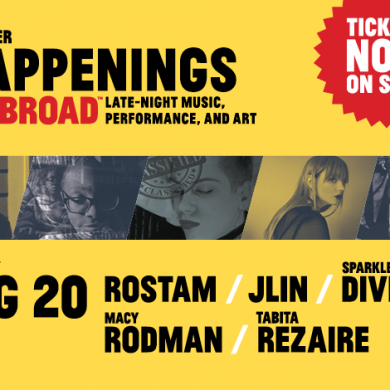 The Broad Museum is quickly becoming a favorite amongst native Angelenos for the amazing contemporary art that features artists such as Takashi Murakami, Jeff Koons, and Andy Warhol. The iconic 140 million dollar museum features 2 floors housing countless amounts of comprehensive artwork. The Broad has recently curated the nonobject(ive): Summer Happenings series, which is a late-night music series mixing music, live performance, and art in various locations inside the Downtown Los Angeles museum. The music curators of this event include Bradford Nordeen and Brandon Stosuy. The latter being known for curating not only the series at The Broad but also MoMA PS1 in New York City. The series as a whole redefines the ideas of music and performance spaces with the interactive collaborations of contemporary artwork fusing with live performance to give a rare experience.

The next event takes place Saturday, August 20th at The Broad Museum. The lineup features Rostom (Vampire Weekend) who will be performing his new material along with dance performers and a string quartet. This will be Rostam’s first West Coast performance and will take place along The Broad’s Plaza. The Gary, Indiana native Jlin will be performing her latest material from her album “Dark Energy” and other classic Footwork tracks. We have Sparkle Division, Macy Rodman, and Tabita Rezaire all contributing performances as well to round out, what will be a unique performance experience for the Happening Series.

Make sure to buy Tickets [Here]