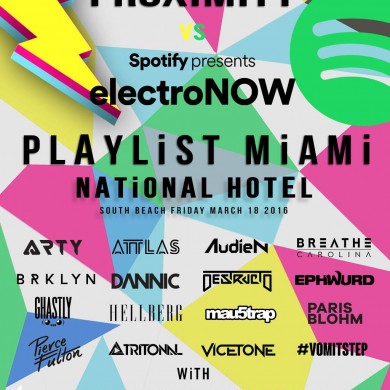 Miami Music Week has officially kicked off and artists and music lovers alike are in for a treat. While ridiculous amounts of parties are to be thrown throughout the city, two additional not-to-miss events have been added to round out the most notable music week of the year.  Spotify hooked up with Proximity and The District to create two incredible lineups that will have you rethinking your MMW party plans.

This Friday, March 18th, at the National Hotel, Spotify’s electroNOW and Proximity will be co-hosting their day-long party PLAYLiST MIAMI.  The most celebrated bass-heavy producers in the scene will be taking the stage together and hyping up the crowd with never-before-seen B2Bs. The stacked lineup features artists like Audien, Destructo, Ephwurd, and Ghastly, accompanied by surprise guest spot clues such as ARKsecret, DIMsecret, HEXsecret, and Secret Gue5t. (Can you guess who they are?) This party is destined to be one of the most noteworthy of the week.

To follow up such an epic Friday, Spotify and The District will be turning down things and throwing one of the more chill parties of the week. Once again this free event is packed with surprise guests and B2Bs with deep house artists such as Two Friends, EDX, Gyffin, and Pierce Fulton, as well as two Anjunadeep sets. Close out your Miami Music Week at this memorable seaside party at the 1Hotel on Saturday, March 19th!