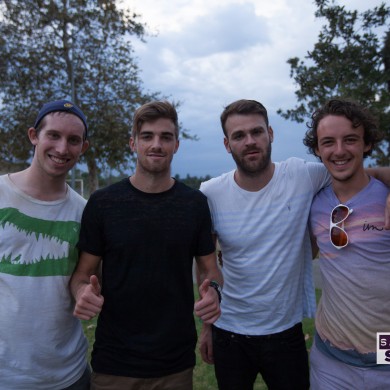 Sean and I had the chance to sit down and catch up with two of Salacious Sound’s faves, Drew Taggart  and Alex Pall of The Chainsmokers. They had just come off of an absolutely epic mid-afternoon set at HARD Summer and still high on endorphins we all sat down to talk TV, music, and their rapid ascension to the top tier of DJ life.

Sean: So, first things first, you guys started off your set with the Game of Thrones remix thing…

Drew: You guys realized it! Thank you!

Caleb: We were already going to ask you a Game of Thrones themed question so it was perfect, actually

Drew: You know what I was thinking in the shower the other day, that I haven’t told you yet, I want to make— so we made this Game of Thrones intro for our set, just ‘cause it’s funny and we love Game of Thrones—but dude, we should make a whole video montage of our career, and incorporate all our DJ friends and shit into it, and make it about our lives and go through the whole opening sequence thing.

Caleb: You couldn’t have segued into our question any better!

Sean: Speaking of all your DJ friends, let’s say hypothetically you had a couple Game of Thrones characters you had to equate to some of them…

Sean: Who would be Jon Snow?

Drew: Oof. He’s a hard one, because he’s like… not really—and I haven’t read the books so don’t get offended—he’s kinda nothing. He just exists throughout the show, like no one’s ever been like, “Oh, Jon Snow, you’re awesome,” it’s more just like, “yep, you’re still alive.”

Sean: Just up at The Wall, still kicking.

Drew: Man now I definitely can’t tell you who I equate with Jon Snow after that intro *laughs*

Sean: Okay, well how about Joffrey?

Caleb: And the Red Viper was our last one.

Drew: Ooo, the Red Viper! That’s a good one… I wanna put good ones down for this shit. Maybe Kaskade?

Caleb: Ok moving on, something I thought was interesting that you said in your set today was when you went, “Not to be cheesy,”—and I might be paraphrasing—“but a year ago we were in the crowd, not on the stage.” So I just wanted to ask you guys about your rise to the stage, and what it’s like from the inside of such a dynamic, ever-evolving scene, to just get thrown in.

Alex: It’s crazy. Even like walking in the Artists’ village, and being part of that, you know what I mean? It’s just a cool feeling to be there.

Drew: And when people know who you are back there, like *whispers*, “Oh look, it’s The Chainsmokers!”

Alex: Yeah, like I was up there today thinking like, this is a big ass crowd, like we’re really doing this right now, and I feel comfortable! It’s not like it was the first one or anything, it’s just like awesome to feel like you make progress. Like to work so hard, to feel like you’re making a difference and doing things that are impacting people’s lives… and your own life, majorly! It’s just awesome. I mean we used to make no money. Like absolutely no money. And we used to like be so fucking cheap and shit. Life was like a week by week deal, like if our manager was booking us, and didn’t get us a show the next week, like it would suck! Life would be shitty *laughs*

Drew: But yeah, it’s just so crazy that we’ve made all these awesome friends that used to just be people I looked up to, and now we’re actual friends. Just to be in a community of people that are like doing their own thing but you still have something in common with these people right when you meet them. That’s a really special part too.

Caleb: Kind of as an extension of that, I’m curious of the persona you guys have shaped, like your internet “Chainsmokers” persona, which could very easily be genuine as you seem like funny people, but just like your ongoing battle/love with Adventure Club and trolls like Dillon Francis, where do you guys see yourselves fitting into it all?

Alex: I feel like we’re a part of the community, like we met Gareth from Knife Party, and like he gave us such a hard time, but he was a nice guy! He was cool, you know what I mean? Like you meet these people and you realize the internet is just this fake place where everyone gets to be a thug, and that’s whatever, but in real life everyone’s just chill. Anyway, at the same time I do feel like we run with our own crew, like we try to reach out for collabs and shit, but we kinda do our own thing. It’s always gonna be “our way” and doing it all by ourselves.

Caleb: And speaking of Knife Party, because you guys keep segueing perfectly into things we wanted to ask—

Caleb: So the kind of “Selfie”/”Internet Friends” kind of song—again the question of troll vs. serious—when you made “Selfie,” after seeing the success of “Internet Friends” and that genre of mockery-but-still-music, was there a moment when you were making that when you were just like… “this is the one, this is gonna launch us”?

Alex: We thought it was fuckin’ hilarious. We sent it to our manager, and he’s just like, “this is stupid.” And we sent it to [Dim Mak management] because they had to OK it, and they were like, “whatever, fine” and everyone thought it was whatever but we thought it was hysterical, so we put it out for free, like put it up on Soundcloud. I remember writing a description, and I was like, “THIS IS A JOKE. THIS IS NOT WHAT WE USUALLY DO. DON’T FREAK OUT. DON’T KILL US.” And everyone was just like, “This is the best! This is hysterical!” And it was only like two verses and the drop wasn’t nearly as heavy-duty. We went back in when it had like… it had like 300,000 plays in like a day or something, and that’s when we were like fuck, we have to do something bigger with it!

Sean: Alright, I think our time is up, but thanks so much!