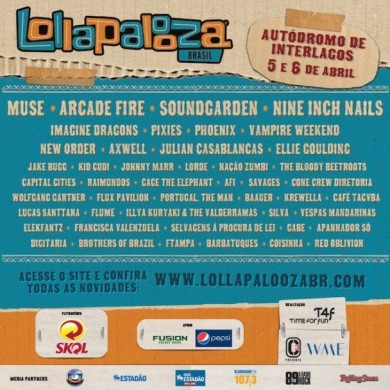 From Chicago to Sao Paulo: Lollapalooza makes its third trip back to Brazil

Sao Paulo’s diverse music scene welcomes the legendary Lollapalooza festival on April 5th and 6th, 2014. Since it’s arrival in 2012, Lollapalooza has grown from having received 135,000 to 167,000 attendees in 2013, hosting the festival in Sao Paulo’s jockey club. This year, they’ve made it even bigger, and have moved the event to the Autódromo de Interlagos, a 4.3km Formula One racetrack.

Heliping Brazilians enjoy their love of alternative international and local artists, Lollapalooza brings a great variety of acts to this year’s festival. While the main acts fit with Lollapalooza’s original focus of rock and alternative music, they’ve got a nice representation of several other genres such as EDM, house, indie, dubstep, hip hop, and a lot of their own amazing home-grown stuff.

Great music mixed with a Brazilian lust for life should make the perfect mix for the perfect weekend festival.