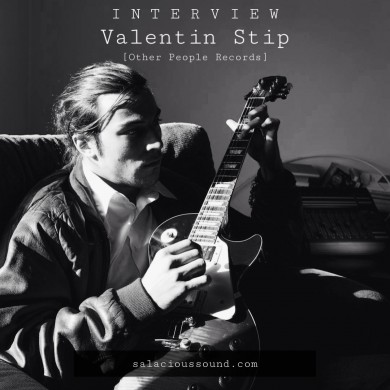 Since I first heard Equis(e) on his Any Time Will Do EP, I’ve been enamoured by the sounds of Other People‘s Valentin Stip. After months upon months of listening to his tracks with new ears, I got a chance to connect with Val recently about his newest offering, Correlation, and the upcoming album it’s a part of, Sigh. I was lucky enough to receive (and be blown away by) a promo copy of the release and had this to say when I got him on the line from New York.

I’d like to start with the most obvious question: what was the inspiration for Sigh?

It would be hard to say that there was one particular inspiration. It was more my ambition to make something more complete, almost like a mental movie with musical tools. So, it was a long process of searching for what you’d call scenes or sets that would work well together and create something new.

So when you say you’re recreating scenes, does each track represent something unique?

Yeah, for me it’s like a different universe to place yourself in and represents all sorts of different moods. The goal was to turn something as objective as music into a living entity with which you can reflect-

Do you think there’ll be an addition of a visual component then?

For now, I want people to be confronted by the absence of a visual component. I want them to try and see what they want to see in the music.

Now, from start to finish, how long did Sigh take you?

It took me about a year and a half-

Wow… And do you have a favourite track?

Maybe not a track per se, but I love the transitionary period in the middle when it all falls silent.

I noticed that the tracks all flow together incredibly smoothly. Do you view the album more as a whole than a sum of parts?

In the end, yes. I’ve been working on it for so long with the full-length in mind and at first I was working on them differently; that was about a year ago, but I got rid of those tracks because I wasn’t happy– the full narrative wasn’t complete enough. From that first draft I restarted and realized that the bigger picture was clear now, and I filled in the blanks that I needed.

Did you approach this project any differently than with Angst?

It was a completely different method from Angst because with Sigh I had a piano which I could record and I was finally able to re-insert piano into my music. I used to play piano all the time, then when I stopped I started making electronic music and Sigh was really a reconciliation of both of these sides. I started recording piano a lot and working more on melodies than beats.

Are there any particular tracks that you think will resonate the most with your audience?

In my mind it would be Alethia or Correlation

It was included in the album because I knew it was the most accessible track. I knew it would have the most direct impact.

Now that you’re done with Sigh, what’s your next step?

I’ve started building a modular synth so I think I’ll try and start using more machines. Using a piano gave me a real sense of what it’s like to produce electronic music using real instruments and I’d like to move away from the computer into a more instrumental, hands-on approach. I don’t know how it will sound musically – haha, it might be techno – but it’ll sound different.

Do you have any plans to play more shows in North America?

Definitely, I think from now I’ll try to play more shows. As I said before, I DJ with records. My live performance is a bit difficult for listeners because it’s pretty atmospheric and noisey. It can be hard to dance to so it was hard to get gigs, but now that I’m DJing records it will be easier to adapt.

I feel like you’ve always been Other People’s most elusive artists – I mean, Hiathaikim was such an incredible track and Anytime Will Do. people definitely want to see you

Yeah, I don’t think the live music adapts well to a concert setting. I can make people dance when I play records, but when it’s my own stuff I get so deep into the sound that I’d make things that make people wonder what I was doing.

Do you find that with Clown & Sunset changing to Other People, you’ve had to change your creative direction too?

I’m lucky enough that Nico is a good friend and I can focus on the personal aspects of my sound instead of trying to keep up with what the label does. The concept of the label is open enough that I feel I can push my music any way I want to and the label will always be a fitting companion.

How did you get tied in with Other People?

That’s sort of a long story. I’ve known Nico (Nicolas Jaar) since I was about 13 years old, I met him in highschool. We were both musicians and exchanged ideas over time, and when I started making electronic music I was sending him stuff for feedback. When I sent him Gravels one day, he thought it was really cool and suggested releasing it on Clown & Sunset. It became an EP and now I’ve continued with them.

That’s amazing that you’ve known Nico for so long.

Haha, yeah I knew him when I was young and starting with piano, and he was already listening to all sorts of things. I would ask him “What IS this?”

I think I have a lot of information here – thanks so much for you time.