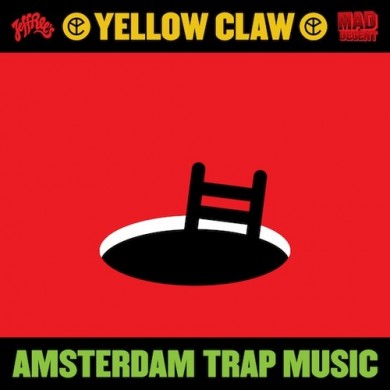 Feedback from the Writer’s Room.

Welcome back! This week over at Jeffree’s, they’ve released an EP from Amsterdam trio Yellow Claw entitled Amsterdam Trap Music. I know, the creativity blows my mind too. It’s a four-track EP, so we’ll jump right in.

First on the block is “Kaolo”, and they certainly didn’t feel like wasting any time. Coasting at a smooth 150 bpm, it feels pretty damn fast, but that’s just fine by me. This track is wild, with an array of Eastern instruments thrown in with the sharp hi-hat clicks and 808s crucial to the genre. The song evolves beautifully; a part I found particularly clever and satisfying is the section from 0:25-0:50 where the track builds from an airy and delicate prayer-like call into a brutal buildup and a warning of the oncoming lunacy as a voice yells, “IT’S A TRAP!” Genius.

Next on the EP is “W.O.L.F.”, and after “Kaolo” I had no idea what I was in for. It’s another 150 bpm concoction, but it doesn’t have the same frenetic energy of its predecessor, which I think is a good call; the excitement inspired by “Kaolo” would quickly become worn out if they employed the same musical devices in all their tracks. “W.O.L.F” is a purebred trap banger, plain and simple. What it lacks in creativity it makes up for in bass, and the slippery synths and repetitious vocal line will make it instantly recognizable to a well-informed audience (speaking of which, if any of you can understand what the hell the voice is saying after “Turn up the volume,” I’d be very interested to know). Solid, but nothing particularly visionary.

Enter “4 In The Morning,” a creepy, distorted, trap master-class. Back down to 140 bpm, “4 In The Morning” brings a very different vibe to the EP than either of the tracks before it. With echoing synth pulses reminiscent of something out of Nero‘s production book, the song just oozes swagger. And not the “Swag” kind of swagger, mind you, this shit has that quality that just compels you to put your head back and groove. I’m moving around so much while listening to this I’m making like 15 typos a sentence. To be fair, I have a certain taste for dark tracks like this, with echoes and grime galore, but if one thing’s for sure, listening to this at 4 in the morning would ruin your chances of getting to sleep any time in the near future.

The EP is finished off with a track simply named “21 Bad Bitches.” Such a name implies high levels of magnificence, and quite unfortunately, the track underperforms in that department. It just isn’t unique enough to come after tracks the caliber of “Kaolo” or “4 In The Morning”; at this point in the EP all of Yellow Claw’s tricks and twists are beginning to feel tired and predictable. The bass isn’t deep enough, the synth is kinda annoying, and I just feel like there are a million tracks just like it. And I think it’s fine to have a dud track on an EP, not everything is going to be perfect. My only question is why would they put it last?

Standout tracks: Kaolo and 4 In The Morning

Thanks for reading! As usual, I’d love to hear your opinion in the comment section, see ya in a week for the next installment.