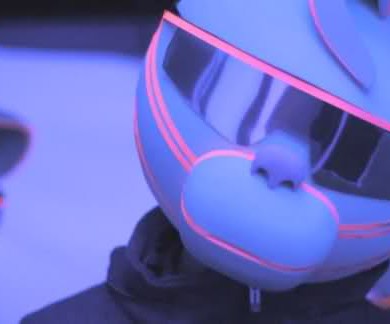 Slowly and surely, Smokey Robotic will be making their way into your home and rocking the beds of your moms and daughters. Agreed, that’s not something you’d like to hear ideally, but, it’s no secret that the ladies in our lives are the ones channeling the most scrilla into the industry. So let’s keep em happy, eh?

I’ve been going on about Smokey Robotic for a couple of posts now. Amidst all the typing and typos, the group has released their latest album, ‘Musium’. Ripe with elements of all the genres that are making you salivate these days, there is a little something for everyone. Get into the making of this album with all four members answering some q’s. And take note of the artwork following the interview below, by Rana Akhavan.

Now, you guys have just have wrapped up your latest album, ‘Musium’ . How does this album differ from ones past?

Konrad Oldmoney: This album is in my opinion more commercially accessible than the prior releases but does not sacrifice anything in terms of lyrical content. It is more dance oriented and smooth than the prior releases as the ones before this one tended to steer a little more towards the extreme of unconventional approaches to sound and structure.

Father Dude: Finding your sound is one thing but maturing within it is another. I feel like we have grown so much since our first LP and the subsequent projects and themes. We know each other… we know what we want to hear and we know how to execute it.

!llmind: It didn’t change in terms of passion and honesty, but texture-wise it’s definitely got an up beat feel to it.. heavy bass and upbeat electronic music, but still very melodic heavy!

What new musical avenues were explored in the creative process? Sounds, genres, etc.

Konrad OldMoney: Well for me I got to mess around with Global Bass, which is a genre I am personally very fond of and working hard this year to bring into the limelight a bit more. You can hear it on songs like Gandhi. Hard hitting earthy drums mixed with odd synthesizer sounds and a nice swing to make ladies wiggle. And also we got songs like The One , which is a complete opposite to the approach of Global Bass. More of a EDM / POP approach, however I did make sure to counter that with some really grimey synths to make sure it doesn’t go all candy.

Father Dude: We also took our time developing the theme and sound. By doing this, we allowed ourselves space to feel like this album/chapter of our careers was “ready”. Being part of the mixing process at SoundAssociation really let us dive into all sonic aspects of MUSIUM.

Where was Musium recorded and how long in the making has it been?

Seer: MUSIUM was recorded mostly at SoundAssociation and was written over the course of 6 months.

Father Dude: What is interesting is that over the period of time since we released Shark and The Helicopter and MUSIUM, we essentially made about 2-3 albums of music we never released. All part of the process and possibly leak-worthy at some point.

Do each of you have a track that you feel particularity connected to? If so, why?

Konrad OldMoney: I am very partial to Gandhi and Lord as they are songs that are very indicative of my Global Bass sound. The One as well. Cos it’s extremely fun to produce that kind of stuff and even more fun to perform. People lose their shit.

Seer: My favorite song on the album is “Calling,” because it deals with a theme that has been very close to my heart for the past year. Feeling the presence of your soul, the subconscious spirit that exists beneath your mind. Finding a way to get closer to this ambiguous part of myself and live more in accordance with this side is what I have been attempting to do recently.

Father Dude: It’s a toss up between “In Your Bed” and “Secret Light in My Soul”. They are honest records much in the vein of “Unlike Anyone” and really touch upon that heartfelt pop sound that has inspired me my whole life.

!llmind: I’m particularly connected to “unlike anyone”.. It was literally the 1st record we did getting back into “new album mode”, and it was just one of those super magical/honest moments.

Which track is Smokey himself feeling most?

Was there ever a point during the making of the album where everyone wanted to take an idea in a different direction? If so, how was an agreement reached?

Konrad OldMoney: We have this system where, if you disagree, we throw a knife in the middle of the room. The first one to get that knife and successfully draw blood, gets to pick the direction.

Father Dude: Yeah, it developed out of playing “knifey/spooney”

Does Smokey have the final say each newly completed track?

If I wanted to seduce a woman with a song from Musium, which would you recommend?

Konrad OldMoney: In Your Bed

!llmind: Sex On The Radio fasho!

And I wanted to talk about your fan’s tattoos a little. How many have been logged to date?

What are the words that have been tattooed?

Seer: “every scar I endure I bleed a little more laughter.”

Tattooing a bands lyrics on you is a pretty significant (and I can’t help but think there are more than one), which brings me to lyrics. Seer, Father Dude, this one is for you. Where do you draw your lyrical inspiration from? Daily life? Women? Avocados? You must have a ridiculously regimented routine to keep your mind brains clear and flowing with creative juices.

Seer: My inspiration comes from the need to express my feelings and ideas. Blending honest emotions with wild imagination, reality and the surreal is how I like to accomplish this. My favorite artists who are masters at this kind of expression are, Kurt Vonnegut, Andre 3000 and recently, Italo Calvino.

Father Dude: It’s how I feel that day. Seer and I have developed a way of recognizing and empathizing. I feel like a mess when I’m writing it but when I step back after the song is done I usually say… Oh shit! That actually made sense! This is good!

Can we expect music videos to precede this album? Smokey’s video game has been on the up and up lately.

Are there any directors that you’d like to work on a video with?