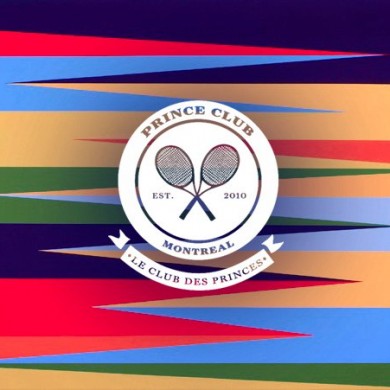 Let me tell you something about me and Montreal house duo Prince Club. I’ve lived in Vancouver for the majority of my music-listening life; unless we’re talking about the speaker-blowing kind, house music doesn’t exist here. I’ve dipped my toes in the water before, but I’ve never really been captivated by tech or prog or house in general. That was until I heard a snippet of Body Holly off of a then-upcoming Prince Club release, Snatch 12. Words can’t really express how much I liked that release so let me put it a bit less eloquently: I love it so much that I went over to Beatport, pulled out my credit card, and actually exchanged money for it. That was one of only two times I’ve ever bought anything on Beatport. (The other time was an obscure remix that Diplo did which I couldn’t find anywhere else on the internet).

I jumped at the opportunity to interview Max Gendron (1/2 of Prince Club) late last week and learn more about their past and the creative process behind their most recent release on Snatch! Records, the Technique EP.

To start you readers off:

So where are you guys from exactly, and where are you living right now? From the looks of all the show updates I see on your Facebook page I’d guess you’re not in Montreal anymore.

I’m from a part of Montreal called Outremont, close to Downtown, and Zach is from just outside of Downtown. We were both born and raised there, went to highschool there and then recently decided it was time to move. Zach moved to London, UK and I moved to LA. So far it’s been going pretty well and we’re able to cover both continents.

Oh, wow. I figured you weren’t in Montreal anymore, but I had no idea you guys lived apart.

Yeah, well Zach’s always been super interested in living in Europe. A year ago he lived in Berlin for a while until he finally realized it wasn’t really for him. He wanted something a bit crazier and more eccentric to fit his personality so he moved to London.  And me, I really needed a change… something that would push me to make better music and surround myself with talented people, producers, and DJs, so I came to LA.

I was reading an old interview of yours on GottaDanceDirty and when they asked you who your inspirations were and I was really surprised to see that they were all dubstep or that second-wave electro.

Well I mean they are the inspirations because they forged my need to make electronic music, not necessarily house music. I think many producers are like that when they want to change- they do a full 180. It’s always like that when you make a change. Nobody goes ‘Oh, I only listen to techno’ and then a year later goes ‘Oh, I only listen to tech house.’ It’s almost always a big change like ours. Guys that were really into rock or rap are now into house and guys that were really into house are into different genres now because they get bored of what they started with.

Speaking of rap and house:

That’s an interesting way to think about it actually, I’d never thought of it that way.

Yeah, it is. And I mean, making music with a computer, man… It’s so freeing in the sense that you can make whatever you want. I have this philosophy that I put enough time in doing the band thing which relies on human beings – not that I’m a hermit or anything – it’s just that coordinating with other people and relying on them to either listen to your music or play your music was always a big burden for me. Especially when you’re a drummer in a band like I was because you don’t have a lot to say about arrangements or guitars. I always had ideas, but I couldn’t really play them for other people and now that I have a computer it’s basically the most reliable band you can have.

Speaking of making music, what do you produce with?

I use Ableton. I have a pretty simple setup: I have Racket 6, Ableton, a midi controller, and a solid soundcard. I do most of my stuff here, but if I really need to mix something in a better environment I have a really close friend of mine that has an amazing studio where I go 2-3 times a week to finish songs and put them together. If not I can just work at home. I have a few questions about the Technique EP. Who’s doing the vocals? I read in the description on SoundCloud that it was one of you guys.

That was Zach doing the vocals and if I remember correctly there’s another high-pitched backing vocals that Poupon and I did, but they may not have made it to the final version of the song. But it’s mostly Zach, he always has these amazing ideas for vocal hooks because he used to be the singer in our band when we were younger. We had an actual hardcore screamo band back in highschool if you can believe that. Neither Zach nor I actually come from house music, haha.

Can you give a bit of insight into the creative process? Where did the vocals for this track come from, was the inspiration from someone else’s work or is it an extension of one of your previous tracks?

Well it’s crazy because it’s really all of our spices together. Poupon had this project that he started a couple of months back and we were at his house in Toronto (we were in town for a show), so he opens his session and plays it and I was like ‘Yo, I kinda like that movement, let me fuck with it a little.’ Then I started messing around with it a little and Zach was like “Yo, I’ve been having this thing looping in my head for a bit from this Kelis song, Milkshake. “That technique that freak these boys”’ and I liked the idea so we started putting together the ingredients. Poupon and I engineered it and then Zach laid down the vocals so that we wouldn’t have any sample clearance issues. And also because like, we’re guys so we wanted the song to say “technique that freaks these girls” instead.  We wondered whether we should get a girl to re-sing it, but then Zach insisted he’d sing it and it would sound fine so I engineered him into sounding like some sorta Coldplay-indie, super epic, accessible stuff and then we put it all together. It all just kinda happened, it only took about 8 hours for the whole track; 4 hours of production, then got food and hung out for a bit, then another 4 hours and it was done. It really came together and that’s what good songs are like. You don’t need to force them, the workflow literally comes out of you really easily. While Max identifies with the producer role in Prince Club, his partner Zach Monpetit identifies himself as the DJ.

Now I noticed that Technique in particular is a lot more accessible to people outside of the tech house scene than your usual stuff, can you talk a bit about that.

It all started really because we had the single thing in mind. We were like ‘Okay, we’re doing the one track, a single, and we’ll pitch it to the label like that,’ but then we ended up making The Block and then it just fit perfectly as a B-side for Technique so we ended up making it an EP. But the original idea and the reason that Technique is such a strong track melodically speaking is because it was supposed to be a single.

Are there other styles that you want to explore beyond tech house?

Well I mean, I’ve always made a big point to support the people who take care of us and my partner Zach. I love house music, I love making it, I love techo. It’s not a secret though that at some point I’m going to evolve into wanting to make some actual records with artists and make pop records and other things that are more accessible, you know? I think that progression will be a normal process throughout my producing career, but it doesn’t mean that if I start making pop I’ll stop making house. Because I already do pop music anyways, like I have a folder I’m building now that’s all singles. Pop singles, rap singles, progressive house singles, just so I can get my foot in the door with major labels and support the people who take care of me.

Are there any other producers that you want to collaborate with in particular? I know you’ve done a few tracks with Poupon already, is there anyone else on your radar?

It’s always something that I’ve tried to do and of course I’ve been trying to get in the studio with the label bosses, but I’ve also been collaborating with a bunch of people now since all my friends make music.  …and I’ve been making tracks with a guy who’s going to be part of our agency soon, Craig Williams. He’s honestly the best producer I know technically and his discipline is just amazing. He has all this amazing analog gear and he’s really solid. I mean, the list goes on and on, but it all spawns from meeting them and being friends with them first before realizing that we can sit in the studio and make music. I think that’s really cool how it starts as a friendship. It makes the workflow so much nicer.

I can imagine. Well thanks for the interview, I know you’re busy in the studio so I’ll let you go.