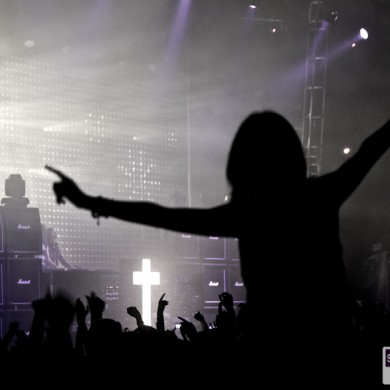 The French successfully invaded Fork York this past Saturday, leaving the local populace in disarray with ringing ears and dizzyingly good vibes.

Leading the invasion were Generals Xavier De La Rosenay and Gaspard Auge, fighting their battle “For Great Justice.” A cavalry brigade led by Colonel Anthony Gonzalez of the M-83rd division led up the rear receiving supporting fire from Charli XCX, Buraka Som Sistema and Austra, and a rallied local militia ranging from over-enthused teens to the upper echelons of the Toronto hipster scene took their arms to the front line.

The Openers
The Main Event — Jousteece
The Afterparty — chez Hoxton The sun was scorching in the mid afternoon when Charli XCX took the stage. Despite a sparse crowd (half of which were taking refuge in the shadow of a tree), Charli kept the energy high in her set, dancing around stage in platforms. Her sound was catchy, and definitely nostalgic — “Nuclear Seasons” sounded like No Doubt’s “It’s My Life” by way of 80s Madonna production. For those of you who might not be familiar with the Kuduro, it’s basically fast Reggaeton that doesn’t totally suck. To compare:

Their set was tight. I couldn’t help but thrust my hands up when they were throwing down. What impressed me even more was the live instrumentation — these guys weren’t spinning their set, they were producing all of their sounds with keyboards and midi drums.

Buraka and security were even nice enough to dispense some free water to the parched crowd. The purple-haired girl on stage lit up the scene with humor, energy, and incredible hip control. She just brought the people to the next level. Buraka owned their set. They deserved twice the crowd they actually had, but they made it happen regardless (and then some). Three costumed ladies set the tone for the Austra set when they came out — I don’t know if they were going for medieval-chic or what, but the look complemented the timbre. Lead singer Katie Stelmanis’ voice pierced through the dark transcendent synth. Especially in “Lose It,” her ability to sustain her notes was stunning. The crowd was into it. Like Anthony’s haircut — M83’s set was very tight, with no loose ends or ragged edges. Compared to Justice, the band delivered a technically spectacular and focused set, but by the end I felt like he should’ve let loose a little more on stage. “Midnight City” was awesome, but “Reunion,” where the band dropped an altered live version, playing out arpeggiated synth extrapolations of the original, was the set’s most glorious moment. Not bad would be a serious understatement. Not in attendance was regular touring saxophonist for the band, Bill Clinton.

A few strikes of thunder brought about a torrential downpour as Justice was setting up, leaving the question of cancellation up in the air. But luckily the storm cleared, and Justice got started. Genesis-into-Helix (with a little bit of Prince’s “Kiss,” I should add) kicked things off as the classic Justice cross lit up, along with two stacks of Marshall amps. Since their last show, Justice has been keeping their visuals team busy tricking out the amp towers with lights. In “Horsepower,” the engine’s roar was really complemented by the stadium lights — it was like being face to face with the infernal machine itself. Notable in their set was the deconstruction of the Justice’s “D.A.N.C.E.” remix into the sample The Jigga Man used for “On To The Next One.” In fact, the whole thing sounded pretty familiar…

Jay-Z and Justice – On To The Next Dance (Terry Urban and DJ Eloy video edit) from Eloy Garcia on Vimeo.

Musically, the set was similar to their first tour stop in T.O., with “Audio Video Disco” taking centre stage (single and album in equal measure). Justice’s recent attempts to position themselves as prog rockers has received mixed reviews, but their lack of proper instrumentation relegated their prog rock status to a Instagram-like tint atop an electro foundation, in performance at least. Meech and Erol Alkan threw down at the afterparty — with Sapporo sponsoring and offering free beer and sushi to select VIPs (including yours truly). I had no complaints.

Salacious Sound coverage of the event below.