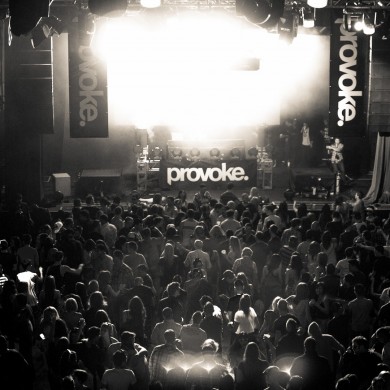 First in the supporting cast was Northend, one of Provoke’s cast of hot up-and-comers, who opened up the main stage. I was especially stoked on his performance because he had several new original tracks to drop that night, and they sounded incredible on that big system. Also supporting were Dzeko & Torres, Jed Harper, Gabe Galluci, Damn Kids, Kurtbradd, Status Brown, and yours truly.

Provoke had a serious production team on hand that night to record the goings-on, and the results (above) are as impressive as the crowd and performances were. The footage really captures the energy and excitement that filled the Sound Academy that night.

You can bet we’ll be following Provoke closely this year. They’re producing world-class shows, supporting amazing local talent, and their attention to the details + forward-looking content creation efforts put them in the highest echelon of quality show producers/curators. It’s content like this video, photo gallery, and the DJ sets that they regularly record and release, in coordination with some of the biggest names in dance music I might add, set them apart from the pack.

Northend is getting ready to release several tracks over the coming months, and also head out on the road. You can listen to his April mix both to get a sense for what to expect from one of his performances, and to get up on the latest electro + progressive house. It’s also the perfect accompaniment to the Loud All Night photo gallery, below.