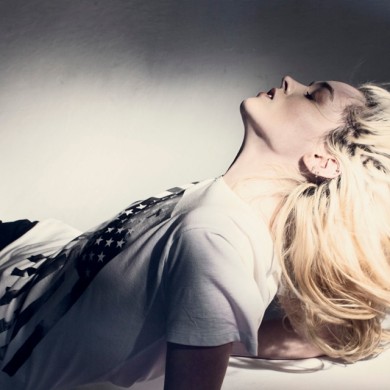 Beatport describes Passarella Death Squad’s first album, Republic of Desire (released in 2010) as “electronica.” It is such an anemic word, especially for the music it is meant to
encompass.

Republic of Desire defies genre, blending elements of shoegaze and minimal-electronic. Vice magazine called it the soundtrack “for those S&M soirees you’re always thinking of hosting,” and everyone and their dog seems to love comparing vocalist Emilie Albisser to a dark Marlene Dietrich (and rightly so). These conclusions are, as you will undoubtedly agree when you hear the songs, not particularly controversial. What makes PDS most interesting to me is that they are a group that does not stop as music, but rather, embraces a broad stylistic aesthetic and produces both music and clothing (my two great loves?). The clothing line, unusually, is how I stumbled upon this group… I bought a couple shirts from Liberty, and when I went to order more online, found the aforementioned Beatport link. I had no choice but to e-mail them and see how deep this monochrome rabbithole led. How can something purely aural also be visual? Aside from simply evoking black and white images (again, listen to Ima and just tell me I’m wrong), music has an element of colour, also called timbre. It is a concept partly borrowed from visual perception, and it has to do a sensation of difference between two sounds, even though they might have the same loudness and pitch. The paucity of the instrumentation, the droning character of Ms. Albisser’s voice, and the almost flourescent buzzing in the background (see Blackout, around 1:30) generate an effect of a stark world without colour.

The exchange between the music and the design is not only one way — visual concepts also go back to influence aural elements. Here, the most important idea is that of chiaroscuro, which literally means “light dark,” and refers to an artistic technique involving high tonal contrasts to generate emphasis. The tonal contrast in the music is as extreme as the tonal contrast in the art — at any moment, there is either silence, or there is the eerie, nearly monotonous voice and the sparse drums. Every note is made that much more important by its setting against a sparse background. The obsession with focused light, both in the lyrical content and the design content, gives a restrained, yet slightly creepy, feeling to the overall aesthetic mission that is Passarella Death Squad.

Anyway, I want to conclude these thoughts with two pieces of PDS good news. First, there is a second album in the works, and the finishing touches are being put on it now, so keep your ear to the ground (and your browser on Salacious). Second, if you want to wear a proper head turning, PDS t-shirt, you no longer need to live in Europe — they will be launching a line called Kempes, which replicates the same sensibilities, this month.