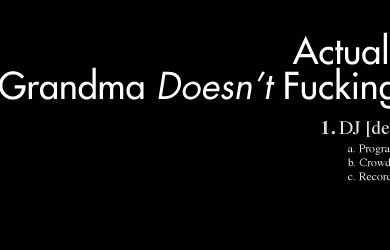 I had an interesting conversation with a friend last night after attending Control @ The Avalon, where Daedelus and Nosaj Thing were playing. I’m not sure why I haven’t brought the subject up on Salacious before now: DJs are getting fucking lazy.

At one point late in the night I fell victim to unfortunate timing when walking past the back bar, which houses a separate soundsystem and DJ set up. A couple of (probably) very green locals were playing ‘Skrillex – Kill Everybody’.

The resulting conversation made me question just what a DJ is, exactly.

modern performance tools and interfaces solve a problem for the DJ, not the audience

Now I’m not here to hate on Skrillex. Every dubstep set I threw down this summer had some Skrillex in it, and each of the three times I saw him perform I had an awesome time.

What I AM doing is hating on the lack of imagination on part of the DJ duo rocking the back room at The Avalon.

Maybe this is unfair, singling out these guys. In fact I kinda feel like an asshole for most of this article so far. Believe me when I say I shed a single tear.

ALL good musicians are like the fucking horse-whisperer of crowds

Sure, all these great performance tools can up your game. You can juggle 57 tracks at once, A-B mix, program your drums on the fly, AND you can even tweet ‘hey mum guess wat I’m deejaying and I just twat’ while you turn your oven on and set the Roomba Robot to ‘Scare Dog’ mode, all from the same device. Cool!

The problem is that modern performance tools and interfaces solve a problem for the DJ, not the audience. And the result from what I’ve seen is NOT an average ‘upping’ of game.

But that’s a digression I want to avoid here. Yes, I acknowledge that you can do some crazy fucking shit with all these rad devices.

But what is a DJ, really? What’s the function? Let me lay it out for you with as little focus on “technical skills” as possible.

A good DJ has excellent programming skills. They know that the tempo and style demanded of an opener differs from that of a headliner. They know how to build the energy of a party by sequencing tracks appropriately.

That, and they’re a fucking individual with their own goddamn taste.

There are several technical skills that can enhance your programming (briefly, and not exhaustive) including phrase matching and knowledge of song structure, harmonic mixing, and lets not forget looking like you’re having a good fucking time / put your hands up / hype hype hype “MAKE SOME FUCKING NOISE DETROIT!!!” skills on the microphone.

Hell this doesn’t just go for DJs.. ALL good musicians are like the fucking horse-whisperer of crowds.

They engage with the crowd effectively. If a DJ is paying attention, gives half a shit or more about whether their dancers are having a good time, and isn’t a complete moron, they can make pretty good guesses about what shit people are enjoying, what isn’t working, and thus what should be played next.

Careful not to blow your wad too early though!

If you aren’t breaking records then you’re a fucking jukebox. Remember #2 though; if your too-artsy techno isn’t working, SWITCHITUP!

What am I missing?