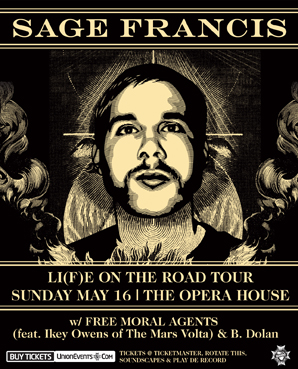 Paul “Sage” Francis is a hip-hop artist from Providence, Rhode Island who has won acclaim both as a freestyle battler and as an unapologetically intellectual lyricist. On May 11, Li(f)e, Sage’s fourth full length album will be released. For every song on the album, Francis recruited a different indie rock artist to write the music, and Sage himself handled the lyrics. Collaborators include Death Cab for Cutie’s Chris Walla, ex Grandaddy frontman Jason Lytle, Sparklehorse’s Mark Linkous, Tim Fite, and members of Califone and DeVotchKa. Joining Sage Francis is Free Moral Agents, a collective of musicians brought together by Isaiah “Ikey” Owens (keyboardist from The Mars Volta) as a means to expand the sounds of what started as a solo recording project. The collective will release their second album Honey in The Carcass of The Lion in 2010.

Want to win two free tickets to see Sage Francis w/ Free Moral Agents in Toronto on May 16th at The Opera House? Leave a comment on this post before a Friday, and I’ll randomly choose a winner to notify by email!