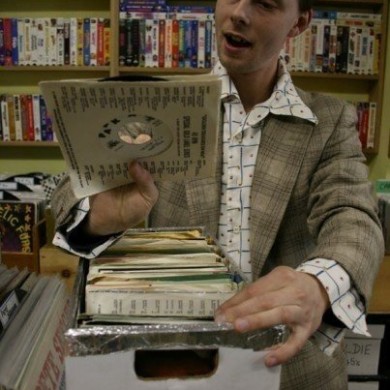 For those of you who don’t know me, I work as a freelance Sound technician for various companies throughout the city and usually, during the Toronto International Film Festival, I work for a certain film studio that shall remain nameless. Let’s just say it’s a really big one. Anyway, my job is to set up rooms and operate the sound board at the Four Seasons and any other space for press junkets. A press junket is when you get an actor or director in a room and they sit in front of a movie poster all day and answer the same questions by different members of the press. It’s really boring for both the actor or director and the staff believe me. But the studios require them by contract to do these junkets to help promote the film so, they gotta do it, and It gives me guaranteed employment for the second week of September every year. Normally this wouldn’t be very interesting at all, even though I can go through a long list of famous people I’ve met and worked with, it’s still pretty boring. But bare with me this story is worth it.

For the technicians, press junkets usually last about six or seven days even though the actors and directors usually only have to do them for one or two days, then they get to relax and enjoy the rest of the Film Festival. Our job starts the night before, setting up the curtains, lights, cameras and video and sound gear. We usually end up working until about 1 or 2 a.m. setting up all these rooms. The company I work for usually has a lot of different films in the festival and so there are a lot of different rooms to set up. Then we have to be back at the hotel at 7 a.m. to double check everything and get breakfast before we start these long boring days of recording someone answering the same questions over and over all day.

On this one particular day I had been up till 3 a.m. the previous night setting rooms up and I had to be at the hotel at 7 a.m. Luckily, I had the privilege of being stuck in a room with the great Dustin Hoffman. So I was a exhausted but a little excited to meet him. We got all the gear checked, the levels set and we were ready to go, by 7:30 so we grabbed some breakfast and waited for Mr. Hoffman to arrive. We waited and waited then he finally showed up an hour late at 9 a.m. He walked into the room, took a look around and walked out. Just then Mr. Hoffman’s publicist came back in to the room and told us we had to strike all the gear and move it to a bigger room. Needless to say we were a little pissed off because we had been up so late the night before getting the room perfect and then we were told we had to take it all down and start over. So, we struck the room mumbling to ourselves about Mr. Hoffman and “who the hell does this guy think he is needing a bigger room. What the hell is wrong with the size of this room? We all had to work in there and we were fine with it. Fucking spoiled actors. etc.. etc.. We finally got the new improved larger room set up in record time by 11:30 a.m. and we were quite proud that we were able to get it done so quickly. We told Mr. Hoffman’s publicist that the room was ready and he went to get him and we waited and waited. Finally at 12:30 Mr. Hoffman came back to the new room with a very large cooler which he placed beside his chair. I could tell right away that he had been drinking and that pissed me off even more. He then excuses all of his people from the room and say’s that he needs to have a little “chat with the boys” meaning us, the crew. So his publicist left, and all the other studio people who seemed to be following him around like a little puppy. He closes the door behind them and locks it. We were all looking at each other like “what’s going on here?” He walks around the room and introduces himself to all of us, as if we didn’t know who he was already, and learns all of our names. He then sits down and opens his cooler, and pulls out a can of beer. He looks at one of our camera men and say’s “Anthony, can you keep a secret?” Anthony says “sure.” and then Dustin Hoffman throws him a beer. He proceeded to go around the room asking everyone if they could “keep a secret” and when the answered “yes” he gave them a can of beer. Except me. He never asked me if I could keep a secret. He just walked over and handed me a beer and winked. Then he sat down in his chair and opened a can of beer and said “My publicist said he didn’t want me to be seen drinking before noon. Said it was bad for my image. I don’t know what the fuck that means but I thought I’m paying this guy to watch my back so, I’d better just do what he says. Sorry I made you guys move all this gear around. I hate doing these fuckin’ boring things sober y’know?” We all agreed that they were boring and finished our beers. He walked back to the door and unlocked it and said “O.K. lets go.” We ended up working a little later than usual on this particular day but it was worth it because we were all drunk by the end of it and Dustin Hoffman remembered our names.

I’m Splattermonkey and that’s my best TIFF story ever.

Splattermonkey didn’t include a track with this so I’m going to toss in the tracks I was listening to while reading the story. I thought it was fun to read to and maybe you will too.Â