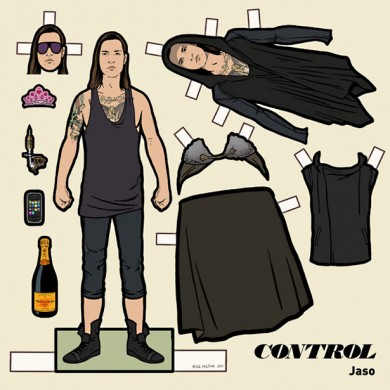 Ryan Jaso is Co-Founder of Control at Avalon Hollywood. Control has cemented it’s legacy at the historic Avalon theatre by breaking ground with the latest music, becoming the platform for upcoming artists, and also being home to the most epic party every friday in Hollywood.

Control at Avalon has helped give a voice to acts such as Skrillex, Dillon Francis, while also being the first place to perform in LA by many large acts such as Dada Life.  A venue that has side stages with many acts and a party that goes til 4am guarantees you will have an amazing night. However, nothing is guaranteed in Los Angeles and as quickly acts and nights gain popularity, they also fade out. Control is currently going to celebrate their 6 year anniversary and have been able to maintain success and remain a relevant night in the cutthroat nightlife scene in Hollywood. We recently spoke to Ryan Jaso to find out what has made Control such a success.

1. What was the process behind creating control and how did it manifest?

My partner Chris White and I were doing smaller scale events in Southern California.  The idea spawned from all the burgeoning new talent and a lot of cool underground parties in LA but no major home for these newer acts outside of the festivals existed.  We never knew it would last 6 years, that wasn’t part of the initial plan but it’s been an incredible journey to this point, I’m happy to say we’ve had some of the biggest artists in the world on our stage(s)< /div>

2. What do you believe to be the contributing factors in the success of Control for these last 6 years?

I really feel like we have the best team around.  My partner is a DJ also so he’s really good at spotting trends and new talent.  We both love all kinds of dance music but we are really passionate about different genres which makes the parties so diverse week to week.  Our booker, Beth Phares is a serious hustler and gets the job done on the booking front week after week.  I’m obviously bias but I feel we have the best venue in the country to host Control every week so that helps too.  It’s really a group effort, I can honestly say we have the best crew that makes it happen consistently and it’s all about consistency when throwing a weekly event.

3. Do you see the Control brand expanding?
We actually just did expand in November to Ruby Skye in SF, Control is now a weekly every Thursday in SF.  We’ve been in talks about a few more markets as well, that I can’t disclose quite yet..
4. You also run Technique Management; how did you expand into artist management?

Initially I started managing my best friend and business partner Whiiite.  One day he asked me to manage him and I never looked back.  From there that led me to meeting and managing other clients that I met doing Control.

5. Have there been any major challenges from running a clothing store, artist management, and Control in Hollywood?
Many challenges, ‘time management,’ being one of the big ones.  There are only so many hours in the day, and as I get older I’ve really started to institute the “work smarter, not harder,” mentality.  I think diversity creates new challenges, but even though I have a lot on my plate, I feel they all really do a good job of promoting each other.
6. You have broken many new acts at Avalon from the side stages to even playing main stage. What has been a factor in your success in talent buying?
I mentioned it before but Control has always been about discovering the next act, and building a night from top to bottom.  Our 6 Year anniversary is a perfect example of that.  You have MAKJ as the headliner, Daktyl and Whiiite both of who are poised for breakout years and Drezo who could be the act we are all talking about in 6 months.  We really try to curate a line up from top to bottom, and being open from 930-4am gives us room to book more than one act and an opener.  It gives us the ability to throw what often feels like a mini festival every week.  I think it is really what makes Control unique to other parties.
7. Anything you want to say to your Control fans?
We are so grateful to have some of the greatest fans in the world, I love seeing the same faces week after week.  Looking forward to 6 more years and new cities…
/////FRVNCH