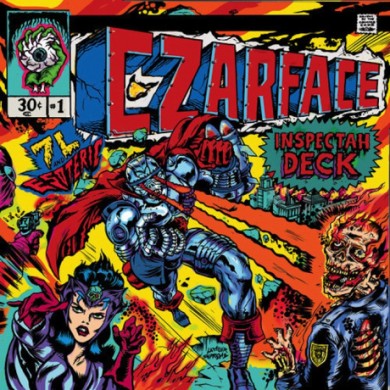 The Latest in Hip-Hop From: Czarface If you’ve been following my Hip-Hop articles on here then you know I love old school East coast Boom-Bap. If you’re an old school Hip-Hop Head then the name Inspectah Deck shouldn’t be new to you. For this project he teams up with underground artists 7L and Esoteric for a cut throat and nerdy affair. Production is handled by 7L and he keeps the vibes very 90’s. The only song not produced by 7L is Let it off, which is handled by the legendary DJ Premier. To say the least, the production is top notch.

Lyrical content ranges from violent threats to comic references that make the nerd in me smile. On the track Rock Beast Esoteric spits: “I’m a super villain, illin, call me Ra’s al Ghul, Who is Bruce Wayne, hey man, cool chain. I train with Shaolin monks, no Liu Kang. I could rhyme that with the clan’s first two names, Wu-Tang.” After hearing that I was sold. Other than the featured MC’s there are a handful of guest appeareces from the likes of Rock  Marciano, Ghostface Killah, and Action Bronson. Each of the guest brings their A game here, my favorite being Bronson’s verse. If you are looking for some east coast rhymes than look no further! Listen to a few songs below or stream the whole album on Spotify.