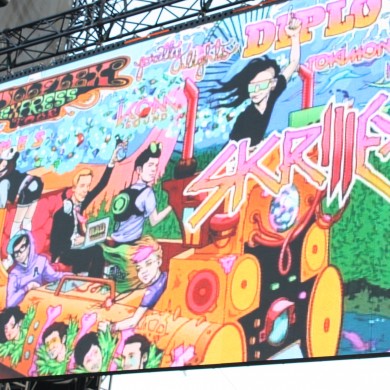 The second last night of the Bluesfest in Ottawa was quite possibly the loudest and most mesmerizing thanks to the tour’s conductor Sonny Moore (Skrillex).

If the night was metaphorically speaking a train journey, as suggested in the tour poster, you started in economy class with Hundred Waters, Diplo bumped you to business class and the show ended with first class treatment.

Hundred Waters, the Florida band, is considered “folktronica” and while the melodies were soft and ambient it felt jarringly strange when followed up by Tokimonsta and KOAN Sound. Tokimonsta (Jennifer Lee) busted out some classic hip hop including: ‘The Next Episode’ (Dr. Dre), ‘The Message’(Grandmaster Flash and the Furious Five) and ‘Simon Says’ (Pharoahe Monch). Lee mixed a bit of everything into her performance including hip hop mash-ups, ambient lounge, reggae and dubstep.  It was pretty evident that her classic training in piano probably helped her read the audience. Tokimonsta kept smiling and brushing her hair throughout her performance.

In the late afternoon, Diplo (Thomas Pentz) also performed sonic acrobatics by including pop, dubstep and hip hop in his set. It was great to see Diplo, Pretty Lights and Skrillex all pay homage to the Beastie Boys (‘Intergalactic Planetary’, ‘Fight for Your Right’, and ‘Sabotage’ were played in order of artist appearance).  Pentz did not shy away from spinning like a hamster in his inflatable Major Lazer plastic bubble. His key strength was interacting with audience and having years of touring experience as founder of the Mad Decent record label. Diplo proves that hamsters aren’t the only creatures who like balls.

As the evening progressed, Pretty Lights (Derek Smith) gave his own funky rendition of hip hop to the audience with his tracks ‘Out of Time’ (samples Carol Anderson’s ‘Tomorrow Is Not A Promise’) and ‘I Know The Truth’. Smith’s sets tend to epitomize the saying – something old is something new again. Pretty Lights gestures to the crowd “give me some more”.

Anticipation was strengthened for Moore’s performance when a five minute countdown flashed on the screen. The 24-year-old Grammy-winning producer provided a sensory overload to Bluesfest attendees. Plastic flutes shot smoke into the air from time to time and colourful lasers danced across the field. As he played ‘They Call It Murder’ (Ini Kamoze) the ship raised off the stage and pyrotechnics shot out from under the wings.

The spectacle that was Skrillex went well past 11:05 p.m. and was an anomaly during the festival. He apparently didn’t mind playing past the curfew. It wasn’t quite a midnight train to Georgia but close enough. Skrillex prior to take off.