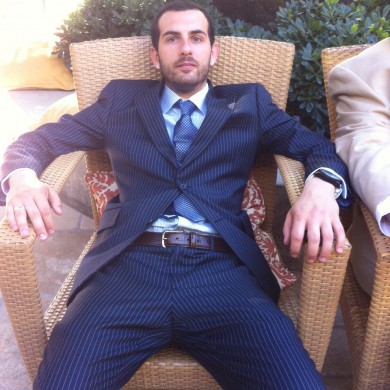 During night two of EDC Vegas 2012, we took in the “standard not-so-standard Borgore and pole dancers set” with throngs of bikini/pastie-clad teenagers crowding the Bass Pod stage at the Las Vegas Motor Speedway.

One thing is certain – had we described the performance, ‘standard’ is not a word we would have used. We’d have used ‘exceptional.’

We managed to get a pretty exceptional interview with Borgore too. I don’t want to pump my own tires, but I will: the modern musician interview is an art, and I am like Picasso on this shit.

I promise this isn’t a dramatic and entertaining departure from our regular interview style, but I do hope to do more sit-downs like this in the future. Borgore: I think my music is sexy.

Borgore: There are a lot of strippers that dance to my music. That’s actually how I got famous. A lot of 19 year old strippers were dancing to my tunes.

Cal: Was that at Pussycat Lounge or Baby Dolls?

Borgore: What? I don’t know…

Cal: No dude, the clubs in Tel Aviv!

Borgore: How come you know the strip clubs in Tel Aviv better than me?

Borgore: Listen. Let me tell you something. One thing you don’t need to do is pay for a female to reveal herself. You’re better to go to a bar, pay $50 on the bar for drinks, and invite a random girl home, rather than go to a strip club, spend $100 on a chick who’s going to cock-tease you, leave, and cock-tease someone else, amirite? Cal: And the guys.

Cal: Why do they make sounds at all?

Borgore: I’m having sex for almost… ten years now. And I never made a sound like “huhhh huhhhh huhhhh”. Never. Cal: What is your favourite Olsen twin movie, AND, why isn’t their hotter/younger sister on your Facbeook info.

Borgore: One thing is, I don’t know any of their movies, I’ve just seen their pictures. The thing is like, there are two hot.. I mean, one hot chick, and the fact that there is a replica of her turns me on. Until four or five months ago I never knew there was another Olsen sister. So my new game is the Olsen family. But yo! One of the Olsen chicks are dating the ugliest fuck I’ve ever seen in my life. He’s French though, so maybe this is why he’s good. I mean, he’s Sarkozy’s brother, so… And Sarkozy is dating that..

Borgore: Wait, why is Carla Bruni the worst?

Cal: No no, SHE’s amazing. Sarkozy. He’s like this little dude…

Borgore: Yo.. I’m dating a chick that’s taller than me.

Cal: Why are you lying to me?

Cal: What about hummous??

Borgore: Is there pita involved? Are they slapping each other with the pita?

Borgore: Ok, so they start the fight with the pita, and just slap the fuck out of each other with the pita. And there’s carrots involved, and they poke each other in the eyes with the carrots.

Let me tell you, hummous wrestling will be the healthiest, BUT, if you pick a chick up after a hummous fight she will fart bad. You should avoid it. A swelling crowd cheers for Borgore during performance on night 2 of EDC Vegas 2012
Photo credit: David Tran for SalaciousSound.com

Cal: Did you watch ‘One Lunatic, One Icepick’?

Cal: Was it too hardcore for you?

Borgore: I don’t know what it is.

Cal: It’s a snuff film. Are you in to snuff films?

Borgore: I mean… me and Mr. Hands are good friends. Some times I do seance, and I call him from heaven. He’s just chilling there with the horses. With the unicorns. Mr. Hands and the unicorns.

Cal: Back to the Olsen twins for a second. Would you rather bukakke Elizabeth, or watch the twins perform a ‘Screwnicorn’.

Cal: It’s where they put dildo’s on the head, and well.. you can imagine the rest.

Borgore: I mean the first one is better, right?

Cal: You only get one Olsen in that case. More bang for your buck if you go with #2. More Olsen for your buck.

Borgore: I mean.. does it turn them on?

Cal: Having you watching them turns them on.

Borgore: Will they be bleeding afterwards? Because I don’t like blood on my bed. I don’t fuck chicks on their period, and I don’t fuck virgins. I avoid blood. So if they’re going to be bleeding, I’ll avoid that. Definitely.

Cal: What do you think is the prettiest animal?

Cal: Which one of your songs best explains the way you felt the first time you did a girl in the ass?

Borgore: “Slap her face, fuck her in the butt!” Flex!

Cal: Easy. Is there any word you won’t say on Twitter?

Borgore: I won’t wish anyone death. I don’t want anyone to suffer.

Cal: Are we going to see more of your live sets? What kind of future do you see with the incorporation with live elements, strippers, etc?

So September we are gonna go on tour with the whole live performance thing. My furthest vision is to go totally live, full instruments, but that’s way down the road.

Cal: Lots of European dates on that. Anywhere you haven’t been or you’re especially looking forward to?

Borgore: I’m going to Ibiza in a month or two. I’ve never been to Norway, looking forward to that too.

Cal: Last question. Why do so many girls show you their boobies?

Borgore: Because I love boobies. Just ask them. If you ask ten girls to show you their boobs, one of them will show you.

Cal: Because I’ve had like three in my life.

Borgore: So you had like one chick, and one chick with breast cancer?

Dude, thank you for the interview.

Borgore: The best interview I’ve had in my entire life!

Cal: One more thing – will you say something rude about SalaciousSound?