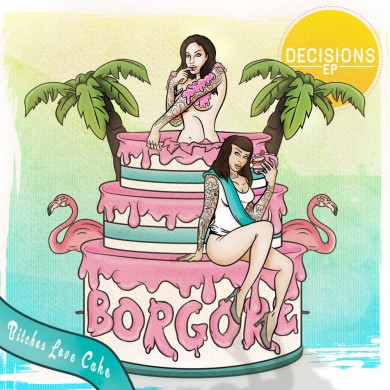 A few months ago, SalaciousSound-favourite, Israeli Dubstep phenom, and self-proclaimed cola addict Asaf Borger, aka Borgore, put out a track called ‘Decisions’ insisting “bitches love cake”. And at the same time as he was explaining in an interview with me that his “new thing is the Olsen-family”, he was hiding a potentially destructive secret – that his new thing is in fact Hannah Montana or, as he said to Rolling Stone “a super hot girl that has an amazing voice and is super fun to work with”.

He calls the track something of a “social-experiment”, on which he wanted fans to judge the track on its merits. And lets be honest, despite the fact that she is a great vocalist, and moreover plays only a minimal part in the track’s background vocals, peoples opinions do tend to be altered when a “brand” like Borgore allies with another like Miley Cyrus. And I really hate putting it that way, reducing artist projects to a brand, but it’s the truth. Which I guess is why it’s newsworthy that Borgore, the most Salacious of Dubstep producers (again, read my interview), and Miley Cyrus aka Hannah Montana, did a track together.

As Borger puts it “If someone used to like the tune before he knew she was on it, and now he doesn’t like it just because she’s on it, he’s lying to himself… non conformists are the biggest conformists they just fuk uglier chicks”