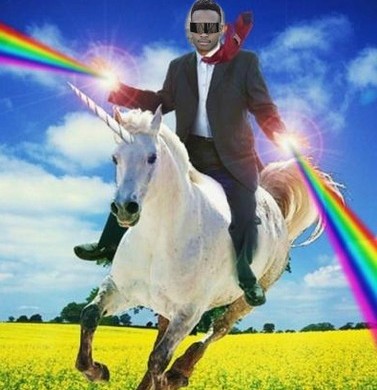 If there’s ever been an artist more content to just let the music do the talking, I haven’t heard of her/him. Hype Jones may have a profile on soundcloud just stupid enough to suck you in – see profile image below, or read his shouty all-caps bio on Soundcloud with a collection of more fantastic tracks – but make no mistake, this isn’t your typical startup producer struggling to make it. Jones has the experience of over a decade in the record industry and impressive skills in the studio.

He also has a collection of accolades. In the last few years he has produced remixes for Dev, Enrique, and Lil Wayne, released originals on Spinnin and cr2, and had his tracks supported by the likes of Tiesto and the Swedish House Mafia.

His latest two tracks are beauties – epic progressive house burners both, each with soaring vocals from a pair of impressive vocalists Myah Marie and Mario Vazquez.

Look at your producer, now back to Hype Jones. He’s on a horse.