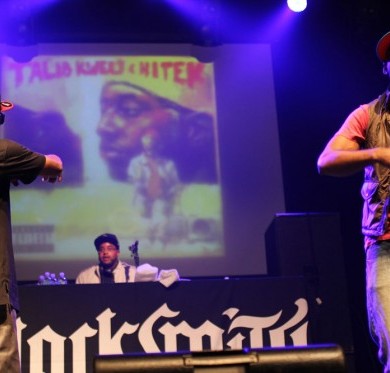 Saturday night I headed down to the Sound Academy for one of the shows I’ve anticipated most this year. Following the release of their second full-length album on May 14th, Revolutions Per Minute, a decade after their first release, Reflection Eternal embarked on a North American tour with several Ontario dates. Some times it’s hard to believe that such talented musicians as Hi-Tek and Talib Kweli have only released two albums together, but each of the two have plenty more solo releases and collaborations to their names. The photos include a breaking / pop-n-locking circle that formed before the undercard, opener Shaun Boothe, and of course Reflection Eternal!

The show began with local undercard Shaun Boothe, who opened with a few tracks that were big hits with the audience, including an awesome rendition of his very popular work “The Unauthorized Biography of Muhammad Ali”. If you haven’t heard of this series, you need to check the video just below right now, and then watch the other 11. Boothe’s delivery and stage persona were great, and the audience enjoyed the range of character displayed in his set, as he took it from outlandish and downright hilarious to serious and introspective over the course of his set.

Talib and Hi-Tek performed a volume of music spanning their collective careers together, a selection from Black Star, and some of Hi-Tek’s solo work. Talib even teamed up with Boothe to perform their collabo late in their set. Reflection Eternal’s set was utterly flawless – a world class example of a great hip hop show in a great sounding and looking venue.

Remember to dial up the resolution if your monitor supports high definition!

One of my all-time favourites by RE: Too Late