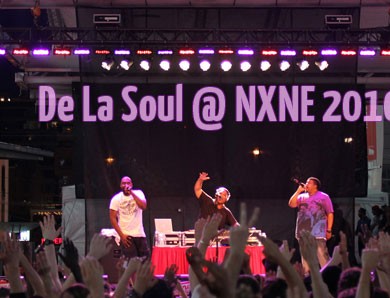 On June 20th, one of the greatest hip hop groups of all time took the stage at Yonge and Dundas Square in front of an audience of such a size rivalled only by that of Iggy Pop’s crowd the night before. To say that the De La Soul set was the most hype hip hop party I’ve ever been to is no hyperbole. As a matter of fact, I have truly never seen such masterful performers rock a crowd quite like these three gents.

They pulled all the classic tricks to hype up the audience, from having “whose side can cheer louder competitions”, to the almighty pull-up. The anticipation in the air, and the raw energy and excitement in the crowd when Maseo performed this maneuver five times in a row is a hard thing to quantify, but the best way I can put it is that the fifth time he did it felt about five times more exciting than hearing your favourite song drop. Never in my life have I seen such a powerful and complete crowd response – not a person could be seen without a hand in the air or a head bobbing.

So why should we care? What does it matter if they’re hype? Isn’t it about the music? Well.. that depends. These guys come from a generation in hip hop that wasn’t about performing. These guys rank up there with dudes like Run DMC and Afrika Bambaattaa and the Soul Sonic Force because they were about throwing a party rather than executing a performance – a sentiment that I think has been lost in live hip hop today. While it’s true that what set De La Soul apart from their compatriots at the time was their superior lyrical content, what sets them apart today is the fact that they still hold it down.