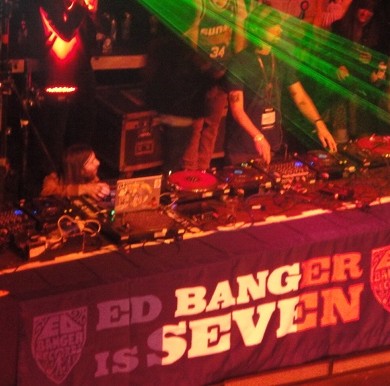 Two things about London are frustrating: the street layouts make zero sense, and it’s actually difficult to plan your weeks around the ridiculous amount of international DJ talent that cruises through this city on the regular.

Exhibit A: This past weekend. In 48 hours I got to see SoMe, SebastiAn, Busy P, Boy 8 Bit and Crookers on the decks.

On Friday night London’s Coronet Theatre hosted the Ed Banger 7th anniversary party. The venue was first constructed as a real theatre in the 1879 – and it still hosts theatre seats on the balcony with the entire first floor cleared for a massive dance floor. And with a capacity of 2600 – the system defines big room sound.

SoMe warmed up the crowd with some familiar French electro and popular tracks like A-Traks remix of the Yeah Yeah Yeah’s “Heads will Roll” until SebatiAn took to the stage.

To be honest, SebastiAn has never really blown my hair back – I’m way more into heavy beats and drops than long, avant-garde electronic builds. But you haven’t experienced SebastiAn until you’ve heard him drop it through a sound system that literally hurts your ears during the highs. I’ve never see any DJ with a command of the CDJs like this. At one point I caught him tweaking the DJM 800s sound colour – using multiple fingers to change up the colour effects, with the filter on, radically adjusting the CDJ’s pitch while having it locked on a 1/32 loop – at the same fucking time! It was like he designed the equipment himself. The crowd was raging so hard that a mosh pit broke out. A mosh pit – during a DJ set. If you’ve experience this before then get at me – I want more of these parties.

He actually made Busy P’s set look tame by comparison – but no less entertaining. An extended version of the “To Protect and Entertain” sans lyrics drove the crowd wild as he smiled, pointed at individual people in the crowd and dropped the “Busy P what the fuuuuuuck?” lyric.

Saturday was a little tamer at a small club called Fire that could maybe fit 500 people (random considering their draw in TO) hosted the Crookers while Boy 8 Bit warmed up the crowd. Those who know me or have ever listened to any of my sets know that I find progressive, non-vocal house to be about as boring as a single drum banging in 4/4 time. So with that in mind I’ll hold my comments about what I did to kill time until the Crookers showed up.

I’m not the first to say that the Crookers have evolved from their electro, party-banger roots. The album is a bold step forward for the Crookers, the tight production and diversity of the tracks ensures that the Crookers will be around of a long time, and that they weren’t just in the right place at the right time at the peak of electro.

Having heard the Tons of Friends album leak before I showed up, I was really excited for this set (I bought the cd at the event to make up for the illegal download), but for some reason they didn’t really play much off the new album. It may be that the album is lyrically, pretty hip hop heavy at times with contributors like will.i.am, Rye Rye, and Kardinal Official, and Europe has never really embraced hip hop the way North America has, so they opted for a more house based set.

They busted out a few old favourites, some new favourites like a remix of Miike Snow’s “Sylvia” – but the track that made the crowd rage harder than anything? A “Circle of Life” remix from The Lion King. Seems like given the small venue they opted (like any good DJ) to play to the crowd rather than use the set as a way to promote the album. “Tons of Friends” is sick – but despite the face that the English crowd didn’t stop pumping their fists, the set just didn’t satisfy the suspense they built up with that countdown on www.crookers.net.

But what did each set from this weekend have in common? Not a single laptop.