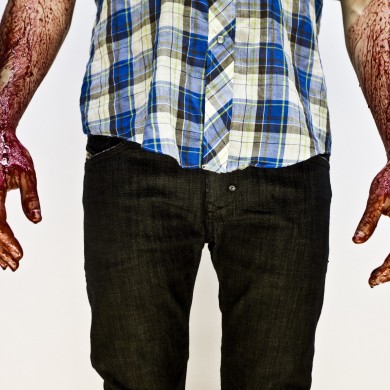 Last night is a show I will remember for a very, very long time. Â The atmosphere inside Wrongbar when I arrived at about midnight was totally unreal – jammed from corner to corner to corner, full stage, and every single person in the venue rocking out hard. Â Barletta was spinning a raging opening set that, alone, was worth the trip down to Queen West. Â He threw down some serious party jams and by 1am, had the house so excited most people already had their shirts off.

Fake Blood hit the decks around 1am, and that’s when things got really sweaty. Â Wrongbar is a very funny place – when it gets really hot water condenses on the pipes and drips like crazy, as if the bar itself is sweating. Â Bodies were flying off the stage crowd surfing, and you couldn’t see to the back of the bar because of a misty fog that just hovered for the rest of the night – we’re talking the THICKEST of London fog. Â It’s rare nights like last that are why I go out – they allow you to feel the excitement in the music you’ve perhaps heard many times, as if it was the first time again. Â I can tell you that nothing quite sounds like Mars, played on the amazing soundsystem at Wrongbar, with Fake Blood behind the decks.

Thanks to Nav, Barletta, and Fake Blood for an AMAZING night!

Just had a DJ mix slide my way from a friend and the playlist is awesomeeee. Â Check it out and let me know what you guys think.