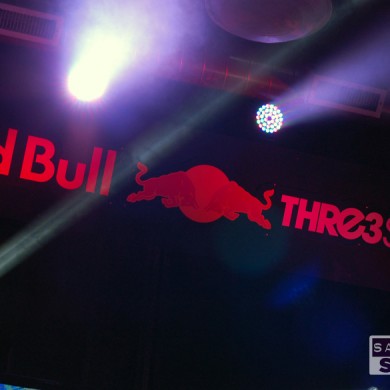 We are scaling a mountain, and as your personal 3style Sherpa, I think it only fair to tell you that while it looks like we have arrived at the peak (the most outrageous night; how could it get any better?), we are merely at the summit.

Last night we were at Reggie’s on the South Side, a venue that I have a particular affinity for. If you are in the market to see performances by teenage Chicago rappers on the brink of notoriety then Reggie’s will be your jam. Reggies was the site for night 3 of the Red Bull 3Style World Finals
Photo Credit: Andrew Vaughan for SalaciousSound.com

Our first man Nedu was interesting – he was the slowest of all the Latin dudes so far. It almost seemed like his effort to appeal to a Western, American crowd really slowed him down.

Next up we had DJ Kostek from Poland. God DAYUM this guy spins like a European club DJ. He was a great hype man to boot, and I enjoyed his tiny pseudo fedora (you know the type). Next up our Canadian competitor DJ Shub literally, had to quit his set 1 minute in because the DECK STARTED TO SMOKE. He literally brought so much heat to the stage that the decks started to smoke. Like Wayne Gretsky’s birthday or that day that they “burned down the white house,” yesterday was a big day for Canada; and it started with this set. The crowd was going ape for all things Canada last night, We Stand On Guard For Thee, indeed!

Shub just merked it. Even walked off stage with a minute to spare, guess he didn’t need it – cos he took home the gold for Canada. Next up New Zealand’s DJ Scizzorhands. He dropped that heavy Chi-town anthem (a sample of Chi-City by Common, finally!). To which my buddy says “Now that’s, a fucking entrance.” His set was dope, a little long – but he tied the whole thing together with a nice homage to MCA.

Oh yeah, he also played Lady Soul’s paradigmatic “R.E.S.P.E.C.T” and Evel Kanyevel and Jayhova’s (okay, I kinda used that one already but he doesn’t have that many nicknames, alright?) “N***as in Paris”. Respect must be the new “Let Me Clear My Throat”.

Lastly, from Boliva DJ Bmau. I’m not gonna waste your time and I’ll just say this: Jazzy Jeff was on his phone for the entire set. Womp Womp.

Z-Trip was amazing, as he without fail always is. Last and certainly red-headed, we had the baddest ginger on the wheels of steel. Our boy, Skratch Bastid. I think I might be in love. He played to his audience, he was innovative, he was charismatic, and he spins better than a Dyson dryer.

We thought it was all over too. Until Z-Trip came back on stage and demanded that Bastid re-drop “Ante-Up” (his crushing set ender) so that he could get in on it. The two riffed off each other and we got to see some real ill old school freestyling on the tables…

And then Jazzy joined in. Remember when I said ships were gonna sink yesterday? It’s turned into an Armada.