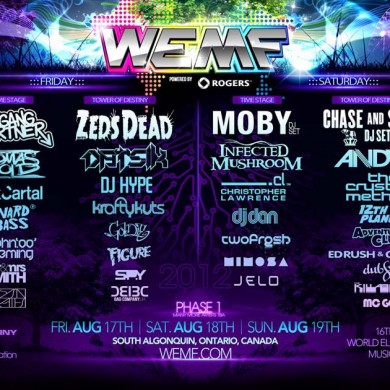 The phase 1 lineup for WEMF 2012 was just announced, and DAMN is the lineup impressive. I mean.. just a really high level of curation on this one – none of that same-y “electronic music is big money now” festival bookings nonsense that’s happening around North America.

For starters, they have the best electro house producer in the world – Wolfgang Gartner – headlining the Time Stage on night one. Headlining is something of a loose term here, because they also have Thomas Gold, Felix Cartal, Harvard Bass, and Keys n Krates on stage that night.

MEANWHILE they’re going to have the two biggest Canadian dubstep acts headlining the Tower of Destiny stage, with a host of incredible talent in drum & bass, breaks, and dubstep from North America and the UK, including Goldie, DJ Hype, Krafty Kuts, and Figure!

While this sort of line-up is standard fare for the Toronto-based show producer Embrace, I must say that I was quite surprised and delighted with the choices for night-two. Namely, Moby and Chase & Status as headliners on the Time and Tower stages, respectively. Both of these acts have had immeasurable impact on global dance music, and I can say from firsthand experience that Moby rips a mean set.

I’m also super excited for my first opportunity to see the legendary The Crystal Method, as they are one of the acts that got me in to dance music.

And of course any opportunity to see my friends – 12th Planet, The Killabits, and Adventure Club – perform is a great opportunity indeed. And these five gentlemen are incredible performers.

Last year WEMF was a fantastic event, yes. But it’s obvious that this year’s lineup is an order of magnitude more exciting. Get your tickets while they last!!