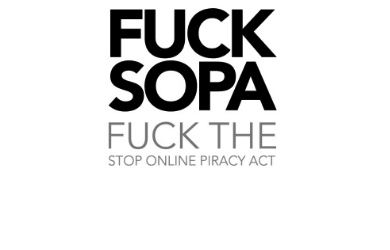 Probably being the most controversial bill in history, this past week we stood united and showed the powers that be how strong we could hold. The internet was created to break our limits not create them. As Arion says: FUCK SOPA! …but friends, i’m afraid the battle is far from over. ACTA has now been proposed, inform yourself and fight against IT too!

ReySon
Information was recently released to the public about the real reason MegaUpload was taken down, it can be seen here. The information states that MegaUpload was about to launch MegaBox, “something that would rock the music industry to its core”. The model was based on consumers (us) downloading music for free while artists retaining 90% of the profits (ie. via advertising, traffic). It would essentially require little need for a label. What are your thoughts on a free music model?
Arion
I think labels have become threatened by the power of what I call the Internet Established Musician (IEM). The same kid that kicked off over the web releasing songs through every site possible is now attaining the same resources major labels had above anyone trying to get exposer back in the day. Now, kids like me are able to properly record, mix, master, upload & sell their material easily from their homes. Marketing has become simplified with the help of sites like Youtube and Facebook. Independent sales have been made possible with sites like Bandcamp, iTunes etc.

Shit, I encourage a site like “MegaBox” because it’s yet another outlet for an IEM like myself to grow. In order to survive in any industry you are required to adapt to change. Labels have been dedicated to their way of running things like marketing and artist development, which is completely fine, but… what they are failing to adapt to is the increasing percentage of musicians that would rather do it themselves. It’s a dog eat dog world and unfortunately before it was able to make any impact, MegaBox got chewed up by the bigger mouths of the industry. There is not much that can be done now but we do have the power to keep pushing for it and influencing the idea… and as far as I’m concerned, I co-sign.


Remember, until Jan 31 every “Like” on my Fb page results in a .50cent donation divided between Oxfam, Save The Children & The Salvation Army. Change the world!
Cheers,
Corey