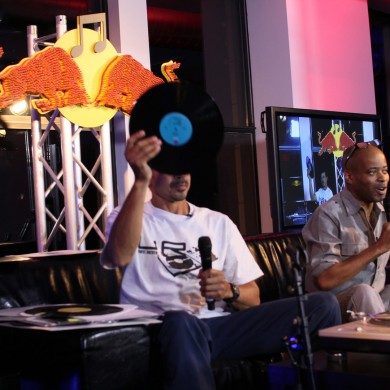 Day two of the Detroit leg on the Red Bull Music Academy World Tour featured another two prominent Motor City techno legends. The first was Mike Banks, co-founder of label Underground Resistance and key figure from Detroit techno’s ‘second wave’, who spoke on a number of subjects at length and with no small amount of passion.

It quickly became apparent why he had earned the nickname “Mad” Mike. Juan Atkins, who is widely credited with originating techno, was interviewed by Banks himself and spoke on subjects from the first talk, and answered a lot of fan questions. On that note, I need to get a quick rant off my chest before I wax on about what insights I gleaned from spending three hours with two of the finest musicians I’ve ever met.

Achieving even a modicum of success in the music industry takes, from what I have gleaned in my few years as a DJ and music journalist, extremely hard work. If you aren’t willing to put in the ground work, work at things yourself without being told what to do, bang your head against a wall when stuff doesn’t go right but keep pushing forward, and do your research and due diligence (tirelessly), then you are probably going to fail.

So if you are ever lucky enough to be given the chance to ask questions of someone who has been making music for over thirty years, running a label, coordinating global distribution and tours, who thirty years ago was a nobody making “weird ass music” that wasn’t easy to make, wasn’t mainstream, didn’t have a scene AT ALL, let alone the internet to access that scene (however small) in Berlin, Toronto, or LA, and that artist was running an extreme hustle just to get their records in other DJs hands… IF you’re lucy enough to be given that chance, please don’t f*cking ask them “what’s the best way to promote my music online”. Either buy a magazine subscription, or rethink your strategy to pitch your super-edgy techno to Juan Atkins and Mike Banks, because that question isn’t impressing them enough to give you a listen.

Atkins and Banks each talked quite a bit about their own careers, production specifics, and especially the adverse business and cultural climate of Detroit. For you readers – you’ll be able to check this stuff out when I publish the videos (reportedly coming next week, or the week after).

Digital is great promotion, but vinyl is a right of passage

Their descriptions of production methods really put me in my place. I mean I had a notion of what things were like in the 80s and early 90s when these guys were starting out; at a pretty early age I was introduced to cutting cassette tape and making mixes. This was something else though. Trying to imagine these guys recording everything on four or eight track tape in the context of today’s DAWs is enough. Add to that the possibility for only destructive editing (ie: take away the undo button) and you get a sense for the difficulties they faced. The complexity and quality that these guys achieved in their records is, in a word, remarkable.

Atkins and Banks are a pair of gentlemen that care a LOT about vinyl. Both use modern production techniques now, but a statement Banks made really stuck with me: “digital is great promotion, but vinyl is a right of passage.” Their dedication to the medium is more than just notions of superior quality sound, or allegiance to their roots; Banks described a feeling that “the many hands caught up in making the record imbue it with spirit” that gives the song movement, or ‘soul’ discussed in my day one recap of Motor City Frequencies.

The late Ron Murphy, a figure that was spoken about at length, felt this way about their music too. This guy is revered in Detroit by just about any techno and house artist that has cut vinyl there in the last 30 years.

For starters, he brought vinyl cutting to Detroit. Before him, the nearest press was in Tennessee and they couldn’t care less about Detroit (and would purportedly take months to ship a master). They were not able to meet the needs of techno producers. Their cutting engineer would take an artist’s master recording and “cut it flat”, meaning without making alterations based on the specific characteristics of the lathe being used, or with a mind to the genre and the goals of the producer. Without that support and the right tools, trying to make techno records must have been like trying to pound a square peg in to a round hole.

Murphy on the other hand would work with the artist “If you could take the criticism”, Banks said. He pioneered new techniques of cutting which emphasized the unique sounds of techno in the artist’s work. While flat cutting was carelessly hacking apart vinyl, Murphy worked with the precision of a surgeon. He was a huge asset to artists like Atkins and Banks.

Murphy cared so much about just getting great record made that he even helped his competition. Banks described a German record maker with a delicate cutting lathe suited for orchestral music – totally unsuitable for techno music, its deep bass sounds, and huge dynamics. Murphy helped this cutter get what the artists were looking for simply because he cared about the quality of music, and as a result had a significant impact on the outgrowth of techno in Germany too.

Murphy pushed this community helping community approach with the artists he worked with too. One of the things Banks appreciated most was Murphy’s habit of keeping acetates of records he had cut, to share with other artists when they came in, to the end of networking the community together and elevating the music through information sharing and some healthy competition.