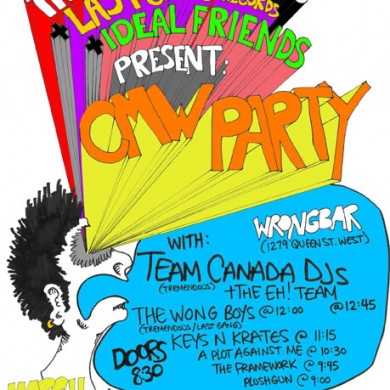 So Wednesday to Saturday this week is Canadian Music Week and there are several artists I’m looking forward to seeing.Â  On Thursday I’m going to check out Keys N Krates along with a group called the Wong Boys that we’ve been following for a little while now.Â  I’ll also finally get to see the Team Canada DJs + Eh! Team DJs live!!Â  On Friday I’ll be attending the Red Bull 3style DJ competition at Circa where DJs from all over the country will be battling, and A-Trak is spinning during the night too!Â  Saturday I’ll for sure be seeing the Ting Tings, and who else I’m not quite sure yet.Â  It looks like I’m going to be sober for a lot of bar hopping this week – gonna have to drive, or the cab fares will kill me!