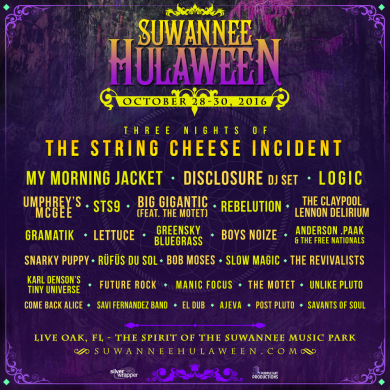 Silver Wrapper and Purple Hat Productions have announced the first round of artists for the fourth annual Suwannee Hulaween, hosted by one of America’s most independently successful and diverse jam bands, The String Cheese Incident, over the Halloween weekend, October 28 – 30, 2016 at the Spirit of the Suwannee Music Park in Live Oak, FL.

Always pushing the bounds with a creative and diverse lineup, several artists performing this year including My Morning Jacket, Disclosure, Logic, Anderson .Paak and the Free Nationals, Boys Noize, RÜFÜS DU SOL, Bob Moses, and Slow Magic are making their first appearance at Spirit of the Suwannee Music Park.

Fans will also be treated to three nights, and 7 sets, of The String Cheese Incident. As always, the band will perform a themed Halloween set, featuring several cover debuts, costumes and other surprises.

Since last year’s Suwannee Hulaween saw triple the amount of attendees, event producers will be making several changes for 2016. Ensuring an elevated fan experience from the moment of arrival, ticket sales will be limited to 20,000 weekend passes. Please plan to buy your tickets early this year to avoid missing out on Hulaween 2016. Tickets go on sale Friday, April 29 at noon EST. An EZ-Pay Payment Plan will be available along with the general on-sale. For fans looking to take the experience to the next level, a limited number of Ultimate Incident VIP Packages will be available. As a tradition, the Official Thursday pre-party will be making its return in 2016 as well, line-up to be announced at a later date.

Attendees can also get excited for the return of an expanded Spirit Lake – an experiential artistic glowing menagerie of multimedia metalwork, paintings, sculptures, light projections and live performances that morphs the prehistoric-looking forest into a vivid dream-like space. Attendees have plenty of time to wander the mystical campgrounds abuzz with costumed fans and interactive camps. Suwannee Hulaween will also feature theme nights, yoga, workshops, and endless interactive surprises throughout the weekend.

About Spirit of the Suwannee Music Park
Set in the midst of 800-acres of Spanish moss-draped oak and cypress along the black Suwannee River and complete with the largest bat house in the southeast U.S, Spirit of the Suwannee Music Park is one of the most beautiful live music venues in the country. The park also offers guest comforts including a general store, full-service restaurant, free showers, indoor bathrooms and water stations.