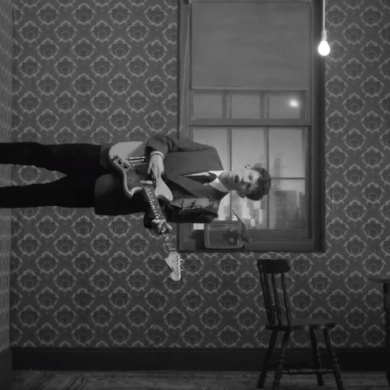 If you read my Best of 2013 list, you’ll know that I became a huge fan of British singer-songwriter, King Krule, last year. It took me a while to get used to his unusual voice and lazy drawl, but once it clicked with me, I was hooked. His debut album, 6 Feet Beneath the Moon, had some amazing tracks, with of my favourites being A Lizard State. A song that can only be classified as jazz-rap. The music video, inspired by Alfred Hitchcock’s iconic thriller, Dial M for Murder, was directed by Jamie-James Medina, who also directed the music video for The Noose of Jah City.

In an interview, Medina said, “Archy [Marshall] and I both love Hitchcock and we’ve spent a lot of time away from music talking about his films. When I heard the phone ringing over the intro all I could think about was Dial M For Murder and the scene where Grace Kelly answers the phone. That really started the conversation.” The video even features the Master of Suspense himself, with footage from an episode of Alfred Hitchcock Presents introducing King Krule.